Johnny Manziel won the Heisman Trophy last night, becoming the first "freshman" to do so. 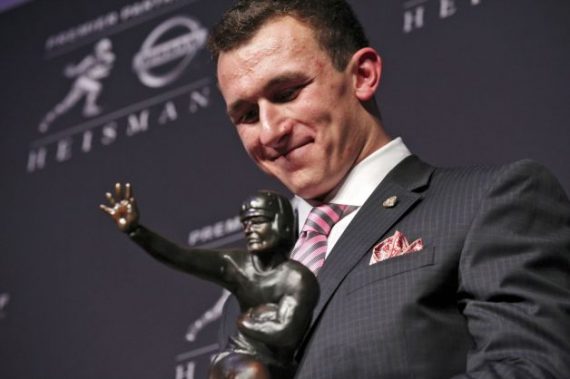 Johnny Manziel won the Heisman Trophy last night, becoming the first “freshman” to do so.

Notre Dame linebacker Manti Te’o finished a distant second in the voting and Kansas State quarterback Collin Klein was third. In a Heisman race with two nontraditional candidates, Manziel broke through the class ceiling and kept Te’o from becoming the first purely defensive player to win the award.

”That barrier’s broken now,” Manziel said. ”It’s starting to become more of a trend that freshmen are coming in early and that they are ready to play. And they are really just taking the world by storm.”

”I have been dreaming about this since I was a kid, running around the backyard pretending I was Doug Flutie, throwing Hail Marys to my dad,” he said after hugging his parents and kid sister.

For years, seniors dominated the award named after John Heisman, the pioneering Georgia Tech coach from the early 1900s. In the 1980s, juniors started becoming common winners. Tim Tebow became the first sophomore to win it in 2007, and two more won it in the next two seasons.

Adrian Peterson had come closest as a freshman, finishing second to Southern California quarterback Matt Leinart in 2004. But it took 78 years for a newbie to take home the big bronze statue.

”It doesn’t matter anymore,” he said.

Peterson was a true freshman for Oklahoma. As a redshirt freshmen, Manziel attended school and practiced with the team last year, but did not play in any games.

Sometimes, an adjective so modifies a noun as to negate it. “Redshirt freshman” is such an instance. In all ways aside from football eligibility, Manziel is a sophomore. He’s 20 years old and in his second year at Texas A&M. But the NCAA allows schools to designate players who they don’t want to put on the field for whatever reason as “redshirts” for a year–in some rare occasions, even two– to preserve four years of eligibility. That’s perfectly fine with me, but I don’t know why the media plays along with the notion that this makes them a year younger.

It’s true that this was Manziel’s first year of playing college football. But quarterbacks often sit for a year or two before getting into a game, since schools typically play one player at that position every single snap. In recent years, the Alabama Crimson Tide has had first-year quarterbacks, Greg McElroy and AJ McCarron, lead the team to national championships in their inaugural season. (Neither, I hasten to add, were anywhere near as spectacular as Manziel.)

None of this is to take anything away from Manziel, who was the obvious choice for the Heisman this year. He started the year with no buzz, became something of an underground sensation through his exploits, and then came bursting on the national scene with a stellar performance in an upset of the #1 ranked and defending national champion Alabama  in November. The notion that the award for the best college football player would go to a defensive lineman when there’s a deserving quarterback is just silly; quarterbacks touch the ball on every single offensive play.

Manziel has an excellent chance of joining Archie Griffin, who did it in 1974 and 1975, of repeating as a Heisman winner.  He’s a truly spectacular player, goes against an impressive SEC schedule, and has another three years of eligibility. Quarterbacks seldom come out early; when they do, it doesn’t work out (see Leaf, Ryan and Sanchez, Mark). Tim Tebow, who won as a sophomore in 2007, came close, finishing 3rd in 2008 (and getting more first place votes than anyone) and 5th in 2009. 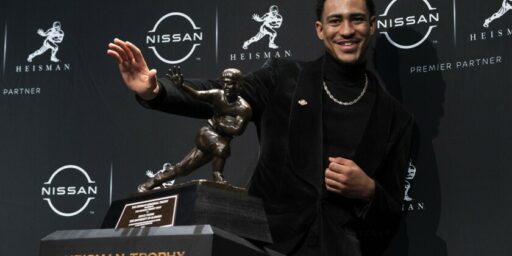