In a stern statement of Washington’s position, Secretary of State Colin L. Powell said today that the United States could not accept as legitimate a declaration by Ukraine’s Central Election Commission that Prime Minister Viktor F. Yanukovich was the winner in a presidential election denounced by the opposition as marked by mass fraud.

Mr. Powell, who said Sunday’s election did not meet international standards, urged Ukraine to act “responsibly” to resolve what has become a political crisis that he said could even have consequences for the relationship between Washington and Kiev.

The secretary also called on Ukraine’s government not to use violence against the demonstrators who opposed the result, tens of thousands of whom filled the main square in Kiev today for a third day.

The secretary spoke after election officials in Ukraine declared that the Kremlin-backed prime minister won the election over the opposition candidate, Viktor A. Yushchenko, by 49.46 percent of the vote to 46.61 percent. Mr. Yushchenko had already declared himself the winner, but earlier today told supporters in Kiev that he was prepared to stand in a rerun of the election.

“Both Mr. Yushchenko and Mr. Yanukovich have suggested today that there may be a way to resolve this,” Mr. Powell said.

“Countries around the world are watching the actions of Ukrainian leaders,” he added. “We urge them to seize the moment.”

It’s the proper stance, but the messenger is inadequate. George W. Bush should be making this statement, and he should be drawing the connection between fair elections, democracy promotion, and national security. Yet he balks because Vladimir Putin supports Yanukovich.

This is precisely the kind of situation when moderate conservatives like me become really frustrated with the president. He gets significant opportunities to give true legitimacy to the noble agenda of spreading democratic ideals, but he hesitates because of what Anne Applebaum aptly describes as “our remaining illusions about President Putin’s intentions in former Soviet territories.” Perhaps I should be glad that there’s at least some message — some diplomatic warnings — come from the administration. But it’s awfully hard for me to feel any sense of satisfaction when the Ukrainian elections are coming at the heels of Moscow’s concentration of power, and Robert Kagan’s observation remains haunting:

Did the United States help undo Soviet communism only to watch as tyranny takes its place? Is that the legacy President Bush wants to leave behind?

I hope that the he proves me wrong on this score. But I’m not holding my breath.

Update: In the comments section, John Thacker provides a link to this White House statement, which echoes Powell. It’s commendable, though again, I wish that the president would personally make it and show the seriousness with which he hopes to push comprehensive democracy promotion. 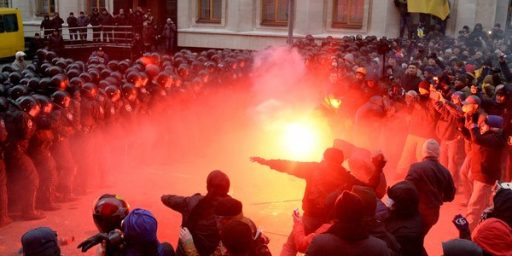