State of the Union Trivia David Kurtz notes the reference to President Bush’s “seventh and probably final State of the Union address tonight” in a front page story in today’s WaPo and puzzles at the use of the word “probably.”

A TPM reader emails to point out that the Constitution requires only that the speeches be delivered “from time to time,” not annually, and points to precedent for off-cycle speeches:

Finally, President George W. Bush is set to deliver his next State of the Union Address on January 28, 2008. It is widely believed that this will be his last address before leaving office on January 20, 2009, but assuming this is incorrect. Bush has the right to deliver either a written or oral State of the Union in the days immediately before leaving office in 2009. Presidents Truman, Eisenhower, Johnson, Ford, and Carter chose to do this. Presidents Reagan, Bush, and Clinton, chose not to.

As a table from the same site shows, several presidents have given an “extra” SOTU. Interesting.

What’s amusing is that Kurtz stumbled over the word “probably” whereas my double-take was over “seventh.” President Bush is in the final year of his second four year term and one would think that this would therefore be his eighth SOTU. And it is. He delivered his first February 27th, 2001 and his given one annually since then. The first one, though, wasn’t called a State of the Union speech but rather “Address Before a Joint Session of the Congress on Administration Goals” and did not have the customary declaration that “the state of the union is strong” or some similar adjective. Indeed, Richard Nixon was the last president to start his administration with a true “State of the Union” message, so all recent presidents are one short. I don’t know why. 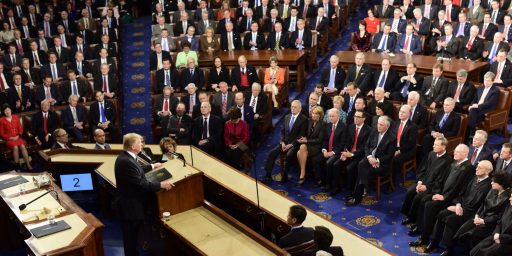