Do yourself a favor and skip the State Of The Union Address tonight. You won't be missing anything important. 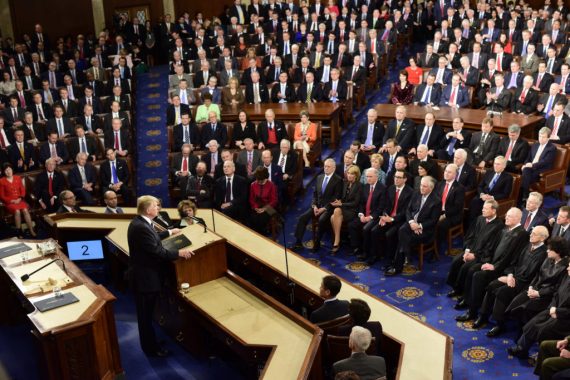 Unless you’ve been living under a rock, you’re no doubt aware that tonight President Trump will deliver the first State Of The Union of his Presidency to a Joint Session of Congress. This won’t be the first time Trump addressed a joint session, of course. He did that in February of last year shortly after taking office, a speech which James Joyner aptly described as both his best and worst speech up to that point. That speech, however, was not officially considered a State Of The Union even though many people erroneously referred to it as such. As has been the case in the past, the cable news outlets, as well as pundits in the blogosphere have already been engaged in the usual hype of the speech, and both CNN and MSNBC have been running countdown clocks to the start of the speech at 9:00 pm, which most of the news channels beginning their “preview” coverage as early as 5;00 pm today. This means that they’ll spend four hours talking about what the President will talk about it and then, after the speech is over they’ll spend another four or five hours, not to mention what will likely amount to the next several days, talking about what the President did talk about. It’s as inevitable and predictable as the ocean tides, with the difference being that the ocean tides can be calming and fun to watch while the annual American version of the Speech From The Throne,

In the end, though, the State Of The Union won’t mean much of anything in the long run. As I’ve noted before, and as other studies that have been conducted since I wrote that post, the address generally has almost no measurable impact on a President’s job approval regardless of how many people are watching. Typically what happens is that the President sees a slight jump in job approval in the immediate aftermath of the speech that quickly dissipates in a relatively short period of time. The policy goals that a President lays out in this speech, which will be feverishly discussed in the days to come, are ones that will most likely go unaddressed, especially given the fact that this is an election year and Congress will have its eyes focused on winning reelection and setting up issues to use as partisan battering rams in the election. And, inevitably in the case of this President, something will happen, most likely in the form of a Presidential tweet to bring whatever goodwill the speech may have generated to an end. As I said, it’s as predictable as the ebb and flow of the tides.

Over at Hot Air, Allahpundit has a plea for the President that he sadly isn’t likely to follow through on:

Go back to the written statement to Congress. A long laundry-list speech of policy priorities can only hurt him by giving the opposition party a point of reference later for broken promises and failed initiatives. If he’s hellbent on having a big night all to himself on national television — this is Donald Trump we’re talking about, after all — he could have his cake and eat it too by sending Congress some anodyne written SOTU and then delivering a short (emphasis: short) primetime speech from the Rose Garden about whatever he wants to talk about. Or better yet, have a 30-minute press conference. Both of those ideas are waaaay riskier for him politically than an SOTU speech would be, but I don’t care. “End the SOTU” isn’t an idea that comes from any feeling, positive or negative, about Trump. It comes from the fact that no matter who’s in the White House the SOTU is garbage and will forever garbage be.

But Trump will probably keep the tradition, partly because he believes that he’s his own best messenger and this is a rare moment when he gets to speak directly to a national audience and partly because, uniquely among presidents, the media’s expectations for him are set so low that he almost can’t help but overperform. To watch non-Fox cable news on any given day, you’d come away thinking at best that Trump is an imbecile and at worst that he’s already in the throes of advanced dementia. Watching him get through an hourlong scripted speech is a small reminder to the public that that’s nonsense. That may be reason enough for him to do it, but the practice should end. Soon. Please.

I’ve made this argument in several posts over the years myself, as you can see in examples here, here, and here. Contrary to what many Americans may think and what several cable news hosts have already stated on the air, there is no requirement in the Constitution that the President deliver a State of the Union Address to Congress, or that it be done annually. The only requirement is found in Article II, Section 3, which states that the President “shall from time to time give to the Congress Information on the State of the Union, and recommend to their Consideration such Measures as he shall judge necessary and expedient.” While it quickly became the tradition that a President would advise Congress of the state of the union and policy provisions he believes should be enacted on an annual basis as President Washington did, the idea of a formal address wasn’t the practice for a significant period of American history. From Thomas Jefferson to William Howard Taft, Presidents would satisfy their Constitutional duty by sending a written message to Congress addressing those issues, That tradition remained unbroken until Woodrow Wilson, whose Presidency saw the establishment of several bad precedents and bad decisions, opted to address Congress, a tradition that every President has followed since then. Even after Wilson’s decision, though, the State of the Union didn’t take on the air of importance it undeservedly has today until 1965 when Lyndon Johnson became the first President to have a State of the Union address televised on live television. With television now part of the tradition, the speech has taken on ever more over-inflated importance. The hype has only gotten worse since we started living in the world of a 365/24/7 news cycle thanks to cable news, the Internet, and political social media.

Doing away with a formal address would also go a long way toward stripping the American Presidency of the regal air that has surrounded it in recent decades. As Gene Healy pointed out in his highly recommended book The Cult Of The Presidency, the similarities between the spectacle of the State of the Union and the spectacle that surrounds the British monarch’s speech during the annual State Opening of Parliament in the United Kingdom are quite apparent. In both cases, you see a Head of State essentially dictating to the people what they, or their government, want to do in the coming year. That may be acceptable for a Constitutional Monarchy such as the United Kingdom, but it appears to be totally inappropriate for a Constitutional Republic such as the United States. Our President is not a King, and the less we treat him like one the healthier it will be for our political system and the state of the union as a whole.

So, let the President send Congress a letter. Instead, they can post it on the Internet for everyone to read and even post a video of Trump read the message if they want. Heck, let him deliver the whole thing on Twitter if he wants. Then people can debate for themselves what the President is proposing without having it force fed to them by the media.

As Allahpundit notes, Trump is unlikely to take the advice to opt to follow the Jeffersonian tradition of a written address for several reasons. For one thing, as he puts it, Trump really does believe that he’s his own best salesman and this speech gives him a chance to address the nation without the filter, or the on-the-spot fact-checking, that the media would ordinarily provide. Even if he did give a moment’s thought to skipping a formal address to Congress, his political advisers would be arguing against it for this reason and would likely tell Trump that he would be portrayed as weak by the media and his opponents, something this President in particular simply cannot abide. So, we’ll get the same address and the same outcome that we’ve gotten from pretty much every State of the Union in recent memory. The President will speak and, in an even more pointless and thankless exercise, the opposition will deliver its response, or in this case, responses, since there will be no less than five different responses including the “official” Democratic response by Massachusetts Congressman Joe Kennedy, and the pundits and talking heads, will do their thing. As I said, it’s as predictable as the ebb and flow of the tides and even more boring and less pointless.

As for me, I’ll be following my own tradition. As I said in a comment to Dave Schuler’s post this morning wondering whether to watch the speech tonight, I haven’t watched a State Of The Union in more than ten years now, opting instead to read the transcript in the morning as well as catch the highlights on the cable news coverage. The pageantry is utterly ridiculous. The speech is always over-hyped in terms of what it means going forward. Finally, the bar is typically set low enough that all any President has to do is not get up there and sound like a blithering idiot and even their harshest critic will be saying how “Presidential” they were. In Trump’s case, expectations will be so low that he’ll be lauded as long as he doesn’t get up there and start throwing French Friest out of a McDonalds take-out bag at Nancy Pelosi.

So, regardless of what Wolf Blitzer, Chris Matthews, Rachel Maddow or whoever tells you, tonight’s speech not only isn’t very important, but it’s utterly pointless and certainly not essential enough that you should feel obligated to waste an hour or more of your time.  Have some sympathy for your sanity and skip it. Watch a good movie or something.  Watch something on Netflix. Given the political tone of the night, Veep, House of Cards or The West Wing would certainly be appropriate or just enjoy a fine adult beverage. Go for a walk (unless it’s just too freaking cold for that). Anything. Trust me, you won’t be missing a thing. It will be a better use of time than watching the annual Speech From The Throne.