Stephen Colbert takes a lot of grief from my side of the aisle for his partisanship but his USO trip to Camp Victory in Iraq deserves nothing but praise. Here’s Campbell Robertson‘s NYT writeup from a couple days back: War, as things go, is a fairly unironic exercise. Sure, there are endless incongruities to be found and parodied in the speeches about war from politicians, generals and heads of state. But war itself — the dirty, dangerous business of soldiers on the ground — seems to be about as earnest a trade as you can find.

Into this comes Mr. Colbert. He is taping four episodes of “The Colbert Report,” the Comedy Central show featuring his egotistical, fake-macho, nationalist blowhard alter ego, in Baghdad this week. It’s the first time in the history of the U.S.O. that a full-length nonnews show has been filmed, edited and broadcast from a combat zone.

The week of shows, taped a day or two before they are broadcast, is called “Operation Iraqi Stephen: Going Commando,” and it has a pretty fancy guest list (in addition to General Odierno, and the president, whose appearance was taped ahead) that includes Iraq’s deputy prime minister. But there is also something kind of meta about the whole thing. Mr. Colbert’s entire career is based on being gleefully insincere, a man who literally wraps himself in the flag to the screaming of majestic computer-generated eagles.

On the other hand he is unquestionably a real supporter of the troops, raising money through donorschoose.org for school supplies for children of soldiers, through his WristStrong bracelets for the Yellow Ribbon Fund, which helps injured veterans, and by donating to the U.S.O. proceeds from iTunes downloads of this week’s episodes.

So it was easy to wonder if, given the setting, he would be a little less mock Bill O’Reilly and a bit more risk-free Rich Little.

Any doubt was dispersed the minute Mr. Colbert ran out onstage wearing a business suit made of Army camouflage and, shortly afterward, declared himself the only person man enough finally to declare victory in Iraq. (General Odierno, whom Mr. Colbert compared to Shrek, diplomatically talked that declaration down.)

Mr. Colbert himself does not seem to be fazed by this seemingly tricky balancing act. Neither he nor his character knows what it’s like to be a soldier, he said in an interview here Saturday night. Only, his character thinks he knows.  “Think of certain reporters who lose themselves in their own self-importance and accidentally give away troop movements and get kicked out of the country,” he said in a not particularly oblique reference to Geraldo Rivera.

“The best way I can show gratitude is to do my show the best I can and make them laugh,” he said. “If I tried to tailor my material to people in the Army, there’d be two things. A, that’d be patronizing. And B, I’d be wrong.”

I watch the show via DVR-delay and am thus always a night behind.  I watched the first episode last night, though, and think he got the tone exactly right.  Getting a military haircut from Gen. Odierno was fairly amusing and a big hit with the troops. 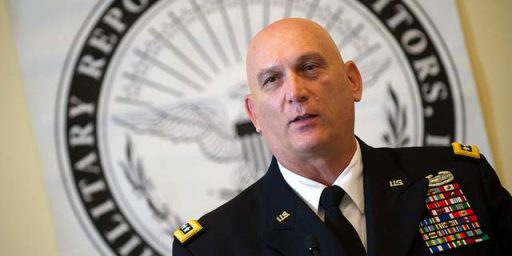