Ezra Klein jumps on a growing meme the home ownership isn’t all it’s cracked up to be and that the government should stop subsidizing it.

He points to Paul Krugman, who argues in today’s NYT that it’s time to rethink our decades-long bipartisan consensus that home ownership should be encouraged. While everyone stresses the advantages of owning your own home, like building equity and creating a stake in one’s community, not enough emphasis is placed on the disadvantages.

That’s really only two reasons, since the last merely restates the third: Owing ties you down.

Not mentioned in Krugman’s column, but more certain than the others:

Anyway, I see from Ezra’s “link blog” that James Surowiecki wrote almost exactly the same article for the New Yorker back in March. Better yet, Andrew Oh-Willeke wrote all of this in a May 2006 blog post, before the subprime lending crisis hit, putting him way ahead of the curve.

Klein, Surowiecki, and Oh-Willeke all note that easy lending exacerbated these issues, since so many people are now mortgaged up to their eyeballs, buying ever-bigger homes, and now feeling the crunch as the economy has slowed down. Back in the days when one had to put 20 percent or more down to buy a home, people were much more insulated from these effects.

Ezra argues, “[T]oday, owning a home looks a whole lot more like renting. Fairly few homeowners actually ‘own’ anything. Rather, they have a sizable mortgage, and they pay money to a bank. That’s not all that different than paying money to a landlord.” But that’s not right. Having lived a somewhat nomadic existence, I’ve “owned” and rented numerous times. Every time I’ve done the latter, I’ve lost money. The landlord got X dollars a month and, at the end of our relationship, I left with nothing. Conversely, every time I’ve taken out a mortgage, I’ve built sizable amounts of equity which I was able to extract from the house upon selling it and then reinvest later. Indeed, there have been years when my house earned more money than I did.

Since moving into our current house nearly two years ago, my wife and I have “lost” money, in that the house would currently sell for perhaps 5 percent less than we paid for it. Then again, we’re still far ahead of where we would be had we rented all these years. And we went into the current mortgage with open eyes; the housing bubble was already bursting but we wanted to move to a nicer house and neighborhood and figured we’d rather be “stuck” in this house than the one we left.

Beyond the economics, there’s a huge psychic value to owning your own place. You don’t have to worry about your landlord selling the place out from under you or “going condo.” You can paint the walls any color you damn well please, rip out the carpets and put in hardwood floors, have all the pets you want, and just generally live your life with greater autonomy. And I’ve never once raised my rent!

But, yes, it’s more expensive and you’ve got less ability to chuck it all and move to Mexico. And, if you bought into more house than you could afford and suddenly need to move, you risk emerging in worse financial shape if prices plunge.

All told, though, I recommend home ownership highly.

That said, however, I agree with Ezra on the public policy question: “Does it make economic sense for home buyers to be subsidized by renters?” No, it doesn’t.

Now, one could argue the degree to which they are. Home owners pay more property taxes than their renting counterparts, which means we pay much more for the public schools, even if we have no kids going to the public schools. And, since high earners, who pay the lion’s share of income taxes, are also likely to be homeowners, we’re paying a disproportionate amount for public services, even those which subsidize ourselves like the added infrastructure costs of supplying roads, utilities, and whatnot to the suburbs.

Even so, the most obvious subsidy, the ability to write off home mortgage interest, has always struck me as silly. There’s not much doubt that it artificially tips the scales not only in the rent vs. buy calculation but even encourages people to buy larger homes than they could otherwise afford since a portion of one’s monthly mortgage payment is actually “paid for” by the taxpayers. There’s no good rationale for that. 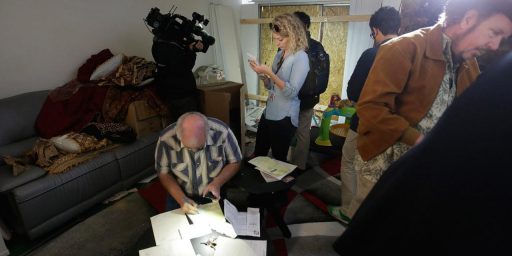 Is It Better to Buy or Rent Your Home?