Supreme Court Declines To Hear About “I ♥ Boobies” Bracelets

The Supreme Court turns down a case dealing with student's First Amendment rights. 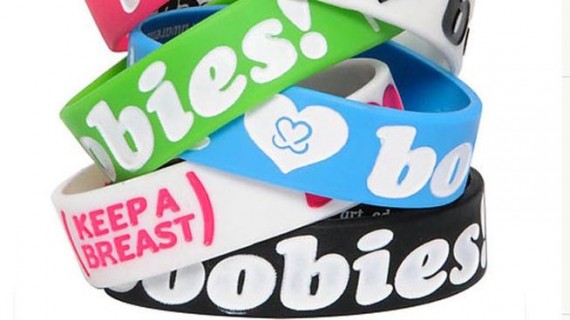 The United States Supreme Court decided today not to accept an appeal relating to just how far the limits of free speech go on a public school campus:

The U.S. Supreme Court on Monday declined to hear a school district’s appeal over an attempt by officials to ban breast cancer awareness bracelets bearing the message “I ♥ boobies,” handing victory to two students who challenged the decision on free speech grounds.

The court’s decision not to take up the case means that an August 2013 ruling by the Philadelphia-based 3rd U.S. Circuit Court of Appeals in favor of students Brianna Hawk and Kayla Martinez is left intact.

School officials at Easton Area Middle School banned seventh- and eighth-grade students from wearing the bracelets in October 2010 prior to national Breast Cancer Awareness Day. At the time, Hawk was in eighth grade and Martinez was in seventh.

The bracelets are sold by a group called the Keep-A-Breast Foundation, which supports breast cancer awareness. The group has expressed support on its website for students who have worn the bracelets against the wishes of school officials.

Both girls continued to wear the bracelets, citing their freedom of speech rights, and refused to remove them when asked. School officials punished the girls by giving them 1 1/2-day in-school suspension. The girls also initially were banned from the school’s winter ball, although they were later allowed to attend. The school district eventually banned the bracelets from all schools.

In some ways it’s unfortunate that the Court declined to take up this appeal, because it would have potentially gone a long way toward resolving some ambiguities in the law regarding the conflicts in the law between the First Amendment rights of students and the power and authority of school administrators to regulate on campus behavior and activity. Going as far back as 1943, in West Virginia State Board of Education v. Barnette, which dealt with students challenging a school that purported to force students to salute the flag and recite the Pledge of Allegiance, the Supreme Court has made clear that the mere fact that a child is in scho0l doesn’t mean that they are denied the protections of the Bill of Rights. In 1969, the Court dealt with the issue of students’ First Amendment rights again in Tinker v. Des Moines Independent School District, a case which dealt with students protesting the Vietnam War in a public high school. The opinion in that case was written by Justice Abe Fortas is perhaps most well-known for it’s admonition that “”It can hardly be argued that either students or teachers shed their constitutional rights to freedom of speech or expression at the schoolhouse gate.”  Subsequent cases, however, have also given school authorities broad authority to regulate or punish speech deemed to be “indecent” or disruptive to the school environment. For example,  two other cases — Bethel School District v. Fraser and Hazelwood v. Kuhlmeier — seemed to limit the scope of student free speech rights, but both are unique cases; the Fraser case involved a student who had given a speech filled with sexual inneundo at an assembly, and Hazelwood involved the extent to which the school had editorial control over a school-sanctioned student newspaper. Most recently, in Morse v. Frederick, the Court had upheld a school’s decision to discipline a student who had unfurled a banner that said “Bong Hits 4 Jesus” despite the fact that there was no evidence that there had been any disruption in school and the fact that the event had actually occurred at an off-campus event. So, it’s fair to say that, in the 45 years since the Tinker decision the Supreme Court has steadily eroded student’s First Amendment rights in favor of school authorities.

It’s difficult and usually inadvisable to attempt to read anything into the Supreme Court’s decision not to hear a particular case. In reality, all that it really means is that there were fewer than four Justices who voted in favor of hearing the case. Nonetheless, the fact that both courts below in this case ruled in favor of the students may be an indication that the Court did not feel as though their previous precedents had been incorrectly applied in this situation. Had that been the case, then it would have been more likely that the case would have been accepted for appeal. At the very least, this means that the opinion of the Third Circuit Court of Appeals, which I’ve embedded below for anyone interested in how the law was applied in this case, will stand as precedent in the Third Circuit and, hopefully, as a guide for other Federal Courts when they are presented with cases dealing with infringements on the free speech rights of students.