The Supreme Court preserved the phrase “one nation, under God,” in the Pledge of Allegiance, ruling Monday that a California atheist could not challenge the patriotic oath but sidestepping the broader question of separation of church and state.

At least for now, the decision Ã¢€” which came on Flag Day Ã¢€” leaves untouched the practice in which millions of schoolchildren around the country begin the day by reciting the pledge.

The court said atheist Michael Newdow could not sue to ban the pledge from his daughter’s school and others because he did not have legal authority to speak for her.

Newdow is in a protracted custody fight with the girl’s mother. He does not have sufficient custody of the child to qualify as her legal representative, the court said. Eight justices voted to reverse a lower court ruling in Newdow’s favor.

The headline of the piece is really a misnomer, as the article itself makes clear. The Court dodged the question on the rather dubious–and seldom invoked these days–premise that Mewdow didn’t have a right to sue.

FILED UNDER: Law and the Courts, California, oath, Pledge of Allegiance, Washington Post 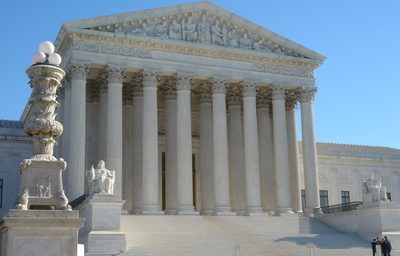