Newt Gingirch ups the ante in his rhetorical assault on judicial independence. 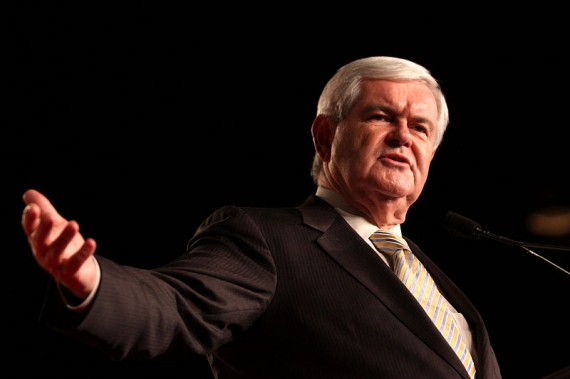 Over the past few days, Newt Gingrich has stepped up his rhetoric against the Federal Judiciary, exemplified by his comments during Thursday’s debate. Over the weekend, for example, Gingrich suggested in a conference call with reporters that were he President he would feel free to ignore Supreme Court rulings he disagreed with:

Newt Gingrich says as president he would ignore Supreme Court decisions that conflicted with his powers as commander in chief, and he would press for impeaching judges or even abolishing certain courts if he disagreed with their rulings.

“I’m fed up with elitist judges” who seek to impose their “radically un-American” views, Gingrich said Saturday in a conference call with reporters.

In recent weeks, the Republican presidential contender has been telling conservative audiences he is determined to expose the myth of “judicial supremacy” and restrain judges to a more limited role in American government. “The courts have become grotesquely dictatorial and far too powerful,” he said in Thursday’s Iowa debate.

As a historian, Gingrich said he knows President Thomas Jefferson abolished some judgeships, and President Abraham Lincoln made clear he did not accept the Dred Scott decision denying that former slaves could be citizens.

Relying on those precedents, Gingrich said that if he were in the White House, he would not feel compelled to always follow the Supreme Court’s decisions on constitutional questions. As an example, he cited the court’s 5-4 decision in 2008 that prisoners held by the U.S. at Guantanamo Bay, Cuba, had a right to challenge their detention before a judge.

“That was clearly an overreach by the court,” Gingrich said Saturday. The president as commander in chief has the power to control prisoners during wartime, making the court’s decision “null and void,” he said.

But the former House speaker demurred when asked whether President Obama could ignore a high court ruling next year if it declared unconstitutional the new healthcare law and its mandate that all Americans have health insurance by 2014. Gingrich said presidents can ignore court rulings only in “extraordinary” situations.

Then today, on Face The Nation Gingrich suggested that Congress has the authority to summon Federal Judges to appear before it to justify their rulings, and even send law enforcement to arrest judges who don’t comply with any such summons:

GOP presidential frontrunner Newt Gingrich said Congress has the power to dispatch the Capitol Police or U.S. Marshals to apprehend a federal judge who renders a decision lawmakers broadly oppose.

Gingrich says if there is broad opposition to a court decision, Congress should subpoena the ruling judge to defend his or her action in a hearing room.

When asked if Congress could enforce the subpoena by sending the Capitol Police to arrest a judge, Gingrich assented.

“If you had to,” Gingrich said. “Or you’d instruct the Justice Department to send the U.S. Marshall.”

Gingrich made his remarks during a Sunday appearance on CBS’s “Face the Nation” where he defended his position that the president has the power to eliminate federal courts to disempower judges who hand down decisions out of step with the rest of the nation.

Gingrich cited the 9th Circuit’s decision that reciting the Pledge of Allegiance in public schools is unconstitutional as an example of a decision drastically out of step with the values of the country.

Of course, Gingrich is largely mis-stating what happened in that case. In 2006, a group of parents had sued the Rio Linda, California School District alleging that the daily classroom recitation of Pledge of Allegience was an unconstitutional establishment of religion so long as it included the words “under god,” which had not been added to the Pledge until the 1950s. A Federal District Court agreed with the parents and issued an injunction barring the daily recitation of the Pledge, even if it was voluntary. In Newdow v. Rio Linda Union School District, an unpublished opinion of the 9th Circuit Court of Appeals overturned the District Court and ruled that the voluntary recitation of the Pledge is not unconstitutional. Now it is true, that in 2002 a different panel of the 9th Circuit Court of Appeals had declared the words “under god” unconstitutional, but that decision was ultimately overturned and the constitutionality of the Pledge was upheld. That is how the appeals process is supposed to work. Now, some might argue that the Constitutionality of the pledge is a silly issue to litigate, and the main Plaintiff in this case, Michael Newdow is something of an activist atheist with a reputation for filing suits like this (in 2009 he tried to enjoin Barack Obama from using “so help me God” in his Inaugural Oath, that suit was rejected).  Those are perhaps arguments worth considering, but once a lawsuit is filed the Courts must deal with it some fashion and the appeals process exists to make sure that complex legal issues get a full hearing. Using this one case as an example of what is typical in Federal Courts, though, is simply disingenuous.

Moreover, as a supposed historian, one would think that Gingrich would recognize the historical roots of his argument. It’s not unlike the doctrine of nullification that was widely popular in the Southern United States before the Civil War, and reasserted itself some 100 years later. After the Supreme Court issued its ruling in Brown v. Board of Education, most of the states in the Southern United States undertook efforts to evade having to comply with the ruling or ignore it all together. Prince Edward County, Virginia, for example, took the extreme step of closing all of its public schools rather than comply with court-ordered desegregation. In doing so, the country provided “tuition grants” to all students regardless of race, but none of the private schools in the county would admit African-American students. In 1964, the Supreme Court declared this policy unconstitutional. Other southern states asserted the discredited theory of interposition to argue that they had the authority to ignore the Court’s ruling in Brown, an argument which the Supreme Court rejected unanimously. In essence then, Newt Gingrich takes the same position on SCOTUS rulings he dislikes that southern segregationists did after Brown. They are as discredited now as they were then.

What’s most striking about Gingrich’s position on this issue, though, is the violence it does to the principle of Separation of Powers. Under our Constitution, the Executive. Legislative, and Judicial Branches are deemed co-equal within their own spheres of power. Gingrich, however, proposes ideas that would completely upend this system by drastically reducing judicial independence. Requiring Federal Judges to appear before Congress every time they issue a decision that some Committee Chairman decides they don’t would be an utter disaster. For one thing, it’s entirely likely that this Congressional power would quickly become subject to abuse as Congressmen and Senators use such hearings not only for political grandstanding but also to put pressure on judges to rule in a certain way in pending cases. Judges would quickly be faced with the dilemma of following the law as best they could and worrying about whether the ruling they issue means they end up on C-Span in three months time getting grilled by a Senator with dreams of running for President one day. It would be the death of judicial independence, and would be harm the rights of those seeking their day in Court who would find that there is an 800lb gorilla called the United States Congress looking over the Judge’s shoulder.

Another thought occurs, of course. If Gingrich believes that it would be proper for Congress to summon a Supreme Court Justice before it to explain themselves, then why wouldn’t it also be proper to summon the President himself before Congress to be questioned and forced to explain the basis for his decisions? What Gingrich is really talking about here is an idea that would set off a Constitutional crisis between the three branches of government.

Matt Lewis wondered on Twitter the other day if Gingrich’s verbal assault on the judiciary was “zany” or politically brilliant. As I’ve noted here today, and also on Friday, zany doesn’t even begin to describe the nature of Gingrich’s ideas on the judiciary, some of which seem to be borrowed from a Harry Turtledove alternative history novel. Dangerous is the word I would use. As for the political brilliance of it all, most people say the economy is all they care about it, and the more Newt talks, the more his poll numbers keep slipping. So brilliant? Not even close.

FILED UNDER: Campaign 2012, Law and the Courts, US Politics, Newt Gingrich