The Economics of Escalator Maintainence 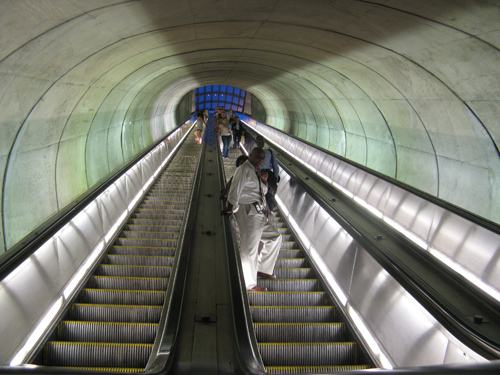 Megan McCardle points to an Unsuck DC Metro posting explaining why the escalators at subway stations in the nation’s capital are so often broken down.

In a nutshell, the service union has adopted a system wherein the most senior employees get to choose which escalator they’ll work on for the next six months.  Naturally, they’ll pick the escalators that have recently experienced the least down time, minimizing their work.  And, since they will be turning it over to someone more junior six months hence, there’s not much incentive to do preventative maintenance directed at long-term performance.

Recognizing this, junior employees don’t do much to correct the bad escalator they’ve been assigned, either, since a beautifully working escalator will simply be poached by a more senior member of the union the next go-round.

[C]learly, it was a terrible idea that needs to be fixed.  Unfortunately, when you’re in a collective bargaining situation–especially a government agency collective bargaining situation–it’s really, really difficult to change the bad rules.  Workers will by now have come to see this as a perk of the job, and view any change to the system as a material loss for which they should be richly compensated.

Indeed. And they’ll feel perfectly justified in this belief. After all, they’ll have spent their entire careers getting screwed over by people more senior and expect to have their turn.