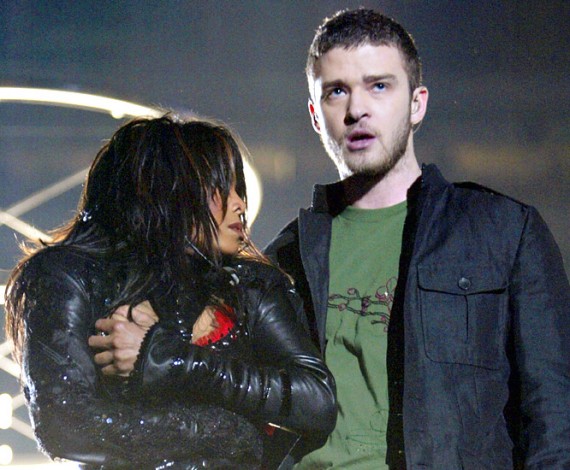 More than eight years after the nation was apparently traumatized by a momentary glimpse of Janet Jackson’s bare breast, the F.C.C.’s efforts to fine CBS-TV and others for the incident have finally come to an end:

More than eight years after the broadcast of perhaps the most controversial 9/16ths of a second in TV history, the government’s case against CBS-TV finally collapsed in the Supreme Court Friday.  Gone with a Federal Communications Commission plea, which the Court denied, was a $550,000 fine on the network for the fleeting exposure of one of performer Janet Jackson’s breasts during the half-time show at the Super Bowl (a pro football game) in early February 2004.

The end of that case was very good news for the TV industry, but — after two trips to the Supreme Court in that case, and two trips to the Court in a separate Fox TV case — television and radio broadcasters still have no final word on whether the FCC’s current policy against ”indecent” broadcasts is unconstitutional.   And also unsettled at this point is whether the FCC will reconsider that policy — as Justice Ruth Bader Ginsburg indicated on Friday that it should.

The Court had been holding on to the FCC appeal in the so-called “wardrobe malfunction” case (FCC v. CBS Corporation, et al., 11-1240) until it had decided the latest round in the Fox TV case (FCC v. Fox Television Stations, et al., 10-1293).  On June 21, in the Fox case, the Court struck down FCC actions against Fox and ABC-TV for fleeting use of four-letter profanity or nude scenes, but it bypassed the First Amendment issue in doing so.  Instead, it ruled only that the two broadcast entities had not had fair notice that the FCC would crack down on fleeting expletives and scripted nudity, which it did in March 2004, after the Fox and ABC shows.

Because the Third Circuit Court had nullified the $550,000 penalty against CBS for the Super Bowl incident without giving the FCC a chance to reconsider, the Justices’ denial of that ruling did, indeed, end the case altogether.  The Third Circuit had not based its ruling against the FCC on the First Amendment rights of broadcasters, but rather on an administrative law rationale: that the FCC had not justified its shift in policy on TV exposures of “indecent” images.  Chief Justice John G. Roberts, Jr., filed a separate opinion, while joining in the denial of review, because he was skeptical that the FCC has, in fact, switched its policy regarding broadcast imagery.

He said he joined in the denial because everyone was now on notice that the FCC, at least under its current policy, will not tolerate fleeting nude exposures.  He did make a further legal point, writing that “it is now clear that the brevity of an indecent broadcast — be it word or image — cannot immunize it from FCC censure.”  (As noted, the image of Janet Jackson’s breast, after her fellow performer, Justin Timberlake, tore away part of the top of her costume, lasted 9/16ths of a second.  Roberts commented in his separate statement that the two performers, after the show, “strained the credulity of the public by terming the episode a ‘wardrobe malfunction.’ “  That label, though, has stuck for the rest of the country, and the incident has been known by that description ever since.)

What Justice Ginsburg was talking about in noting “technological advances” refers to an argument that many in commercial radio and TV are now making: that the arrival of cable TV and the Internet has made it unfair, and constitutionally discriminatory, for the government to police “indecency” only on radio and TV, and not on other new media.

Now that this matter has been resolved, we can finally move on to all those less important issues the F.C.C. has been ignoring  I guess.