The Tiger or the Tiger: What’s Ahead for Egypt?

There is either a military government or an Islamist one in Egypt's future.

In all of the heated debate over Egypt’s future following the military coup that ousted its first democratically-elected president, Mohamed Morsi, I think that a reminder about the results of the 2011 Egyptian parliamentary elections is in order. Here’s a graphical representation: 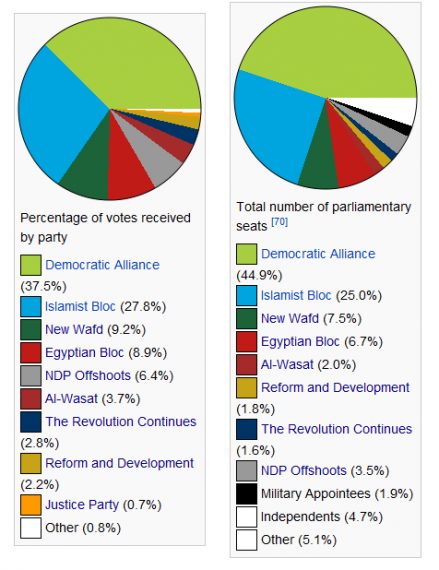 Of the parties listed above, the Democratic Alliance (parties allied with the Muslim Brotherhood—37.5%), the Islamist Bloc (Salafist parties even more radical than the DA—27.8%), and Al Wasat (3.7%) are all Islamist parties with an aggregate total of 69% of the vote. The largest secularist party was Al-Waft with less than 10% of the vote. In general, secularist parties fared best in the prosperous suburbs of Cairo and did very poorly in Alexandria.

It’s possible that after the unpleasant experience with Morsi that public opinion may change but in what direction? Most Egyptians are clearly not liberal democrats.

In my view the greatest likelihood is for either a return to the status quo ante, perhaps a kinder, gentler Mubarak or another Islamist government, a Morsi who isn’t Morsi. Societies depend on institutions and the two strongest institutions in Egypt are the military and the Muslim Brotherhood.