The ‘Too Big to Fail’ Problem

Now that Freddie Mac and Fannie Mae have joined the “too big to fail” club, isn’t it high time we started thinking about how to avoid allowing companies and other quasi-private agencies to get into these problems in the first place? It seems that over the past few decades, the Federal government has pretty much given carte blanche for any large corporation to ignore sane business principles as long as their revenues are high enough. I’m not an economist, but I can’t hope avoid the thought that this history of bailouts does, in some perverse way, incentivize risky behavior by ensuring that there are no real consequences for your risks–as long as your failures are big enough.

Having read various responses to the recent financial and mortgage industry bailouts, it seems like the most common policy suggestions regarding bailouts are these:

1) Stop bailing companies out.
2) More regulations for the industry in which the bailouts occur.
3) Punish executives after a bailout–remove them from their positions, etc.
4) Nationalize or partially nationalize (ie own a large of stock) of the company being bailed out.

Personally, I’m inclined towards #1, as I don’t see why the government should step in and stop a business from failing. However, the odds of bailouts actually stopping are pretty much zero, as one consequence of democracy is that government has to be seen “doing something” in response to a crisis, even if the best response is for the government to ignore it.

Clearly, then, there’s some consensus that there needs to be some harsher consequences for future bailouts. Of these, the most likely to occur are probably #2 and #3, as thankfully there’s not a lot of political will for the government to control businesses in this country.

The problem is that both of those responses to the problem don’t seem to be likely to keep bailouts from happening in the future. For one, bailouts cross industries, so more regulation in one industry isn’t going to really affect a bailout in another. Also, as we can see from the past few decades in business, it’s clear that monumental failure as a high-profile corporate executive doesn’t actually seem to hinder one’s job prospects, unless that failure includes prison time. Additionally, the prospect of just losing executives might not be enough to change a corporate culture as a whole. After all, if the company survives, what does the Board care if they have to find a new CEO and CFO?

So having thought about this for a bit, the idea I think ought to be thrown around out there is this: if we have to bail a company out because it’s “too big to fail”, then the consequence a company should face for that bailout is to ensure that it doesn’t become “too big” again. In other words, if the federal government bails out a company, it ought to require that the company break itself up, preferably into at least three companies. That way, the company suffers consequences, but at least portions of that company will come under new leadership, and a secondary failure of one of the new companies is less likely to cripple the industry and economy as a whole.

Not being an economist, I’m sure somebody’s already thought of this, and there’s no doubt that there’s going to be some refinements here, but a mandatory breakup of a bailed out company seems to be the best way to disincentivize too-risky behavior without the risk of over-regulation. 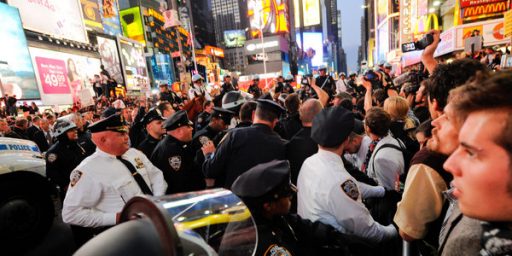