The top earners at the top firms bailed out by the U.S. government during the financial crisis will have their pay and bonuses drastically cut. Deborah Soloman and Dan Fitzpatrick for WSJ:

The U.S. pay czar will cut in half the average compensation for 175 employees at firms receiving large sums of government aid, with the vast majority of salaries coming in under $500,000, according to people familiar with the government’s plans. As expected, the biggest cut will be to salaries, which will drop by 90% on average. Kenneth Feinberg, the Treasury Department’s special master for compensation, also intends to demand a host of corporate governance changes at those firms.

Mr. Feinberg’s ruling, expected in coming days, will provide fodder for the long-running debate about whether the Obama administration is being overly tough or overly lenient on Wall Street. An executive at one of the seven companies under Mr. Feinberg’s authority said the terms came as a shock, especially because they changed so suddenly. The compensation restrictions “were clearly much worse than what had been anticipated.”

The largest single compensation package will be less than $10 million and is destined for a Bank of America Corp. employee, according to people familiar with the matter. That is much less than Wall Street’s standard payouts for star employees. Yet some executives will still walk away with large paychecks. And some big salary cuts might skew overall numbers. Outgoing Bank of America Chief Executive Ken Lewis will receive no salary for 2009. Already, Citigroup Inc. is telling employees the net impact of Mr. Feinberg’s rulings will be minimal because the cut salary will be shifted from cash to longer-term stock grants, said people familiar with the matter.

The Obama administration gave Mr. Feinberg the job of more closely tying compensation to long-term performance, something the White House believes will help prevent employees from taking unnecessary risks for short-term gains. The administration believes skewed compensation incentives were one cause of the financial crisis.

Stephen Labaton of NYT frames it this way:

Responding to the furor over executive pay at companies bailed out with taxpayer money, the Obama administration will order the firms that received the most aid to slash compensation to their highest-paid employees, an official involved in the decision said on Wednesday.

The plan, for the 25 top earners at seven companies that received exceptional help, will on average cut total compensation this year by about 50 percent. The companies are Citigroup, Bank of America, American International Group, General Motors, Chrysler and the financing arms of the two automakers. Some executives, like the top traders at A.I.G., will face tight limits on their pay. In addition, the top-paid employees at all the affected companies will face new limits on their perks. The plan will also change the form of the pay to align the personal interests of the executives with the longer-term financial health of the companies. For instance, the cash portion of the executives’ salaries will be slashed on average by 90 percent, and the rest will be replaced by stock that cannot be sold for years.

But while the plan would pare compensation substantially from what the highest-paid people at the companies might have received under normal circumstances, it would still permit multimillion-dollar pay packages.

In addition, it would have no direct impact on firms that did not receive government bailouts or that have already repaid loans they received from Washington. Therefore, it is unclear how much effect, if any, the plan will have on the broader issues relating to executive compensation, income inequality and the populist animosity toward Wall Street and corporate America.

There’s the question of the fairness of setting the conditions of the bailout long after the loans were agreed to.  For that matter, there’s an equity issue in that some or most of the people whose salaries are affected may not have even been working for the firms at the time of their collapse.  But, hey, these companies took billions in taxpayer money, so they should just suck it up, right?

And, hey, the American people support this.

If even Republicans want to screw these guys over, what’s the harm?

The Obama administration has shown a shocking disregard for the rule of law when contract rights interfere with the administration’s ability to reorder the American economy as it sees fit.

So set aside the question of whether compensation at financial firms is “too high,” however you propose to measure it. Set aside the question of whether these troubled firms will be able to keep their best people, who presumably now will be targeted by unregulated firms like hedge funds that will be free to pay market rates.
The basic problem is here is that many (most?) of the compensation deals the Obama administration is shredding were set in employment contracts. Granted, some of those employment contracts were signed after the law setting up pay “czar” Kenneth Feinberg’s position and empowering him to review pay packages at TARP firms. But a lot of them are pre-existing contracts and it’s those contracts that are the main concern.

Feinberg in fact is trumpeting his success at forcing so-called renegotiation “even for contracts over which he did not have explicit authority.”

The bottom line thus is that Obama is having his minion coerce TARP executives and employees into ripping up contracts Obama doesn’t like so as to assuage the populist public. In doing so, Obama and his appropriately entitled “czar” are exhibiting a basic lack of respect for the rule of law.

Unfortunately, these are not isolated incidents. As I wrote back in May, they are each “of a piece with the totality of Obama’s program.”

There is no way this will work as advertised.  If the administration actually follows through, most of these executives will quit and get higher paying jobs elsewhere.  Executives not directly affected by the pay cuts will also quit when they see their prospects for future salary gains have been cut.  Chaos will be created at these firms as top people leave in droves.  Will the administration then order people back to work?

But, so what, right?  It would serve these companies right, wouldn’t it, to lose their best people?  I mean, aside from the fact that they owe the taxpayers tens of billions of dollars and the same leaders who are pushing this policy deemed them “too big to fail” just months ago?

Well, Yves Smith thinks this is just a “feel good” measure that will do very little.

Pay cuts falls well short of the oversight the government should be exercising (any private owner with that big of a stake would have thrown out the board and installed new management, for starters, and be all over AIG like a cheap suit). So this is an overdue, token measure to appease the public over the AIG retention bonuses that were also extended to clearly non-essential support staff, which is a clear tipoff that they were also extended to non-essential management.

Four of the companies are auto bailout related, so we can exclude them as far as implications for big financial firms are concerned.

Citigroup is an obvious ward of the state too, and the AIG argument applies there. The government should have more control there too, which does NOT mean micromanagement. When the Swedish nationalized their banks, they replaced management and set strict goals and targets, but did not interfere in operations. Bank of America may look like a borderline case, but it would be dead now had it not gotten emergency infusions. Given its credit card losses, Merrill, and Countrywide (for starters) combined with the sudden exit of Ken Lewis, it may well be in worse shape than is now perceived.

The point is that the collection of these scalps will do nothing to comp levels ex these firms. The companies that also enjoy implicit government guarantees are free to do the “heads I win, tails you lose” game of privatized gains and socialized losses. And Ken Lewis is the poster child of why these measures are completely meaningless. He sacrificed his 2009 pay, but will still collect $125 million when he departs Bank of America.

If the government is going to backstop the industry (and this isn’t an “if” anymore), it needs to limit those firm’s activities to what is socially valuable and regulate them heavily to contain risk taking. As we have said, reining in executive pay (and note there is no will to do that anyhow) is not an effective approach. Those employees who don’t like that are free to decamp and raise money in ways that do not involve the regulated firms in any way, shape, or form, save perhaps counterparty exposures on very safe, highly liquid instruments.

Yeah, but meaningful reform is hard and hanging a few scalps on the wall is easy and makes us feel good. But, really, as James Pethokoukis points out, our wrath here is misdirected:

If I made of list of factors contributing to the recession and financial crisis, Wall Street pay would come in around 6th, after 1) easy monetary policy; 2) TBTF; 3) US housing policy; 4) global savings glut/China labor shock; 5) Wall Street group think. Yet pay is where so much energy is being directed at this issue thanks to its populist appeal. America hates TARP so Washington needs to make amends by hammering execs at TARP recipients.

But most of those things involve government or are totally out of the hands of greedy business executives.  And it’s the latter we really want to punish.  So don’t bother me with facts.

UPDATE (October 23):  We’ve moved from the theoretical to the real in less than 24 hours: See Top Employees Flee Pay-Limited Firms. 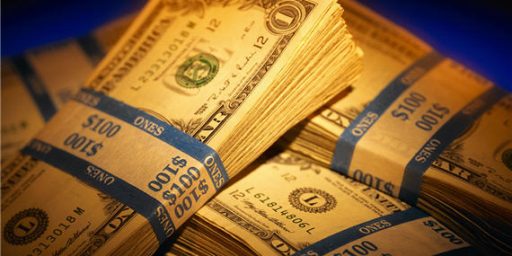