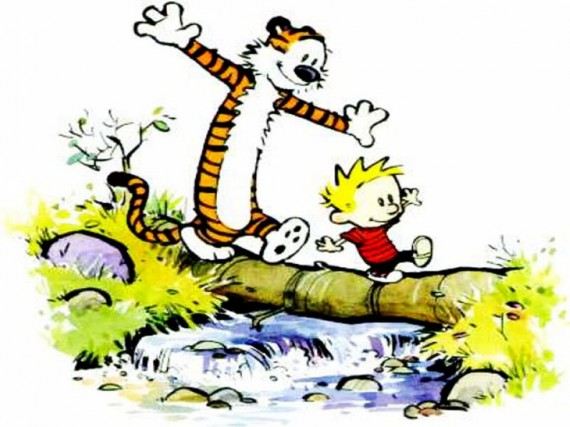 Richard Beck, an experimental psychology professor at Abilene Christian, has written a comprehensive “Theology of Calvin and Hobbes.”   A sampling from the intro:

Charlie Brown’s negative affect swirls around low self-esteem where Calvin is mainly frustrated that he can’t get others to fall in line with his plans or recognize his genius. In short, Charlie Brown and Calvin are polar opposites.

Or are they? When St. Augustine diagnosed the root problem of the human condition he used a metaphor, Incurvatus in se which is Latin for “curved in on itself.” For Augustine human sinfulness is due to the fact that our selfhood is bent in upon itself. All arrows point toward me. This self-focus lies at the core of sin. Thus, despite the vast differences between Charlie Brown and Calvin they both illustrate Incurvatus in se. Charlie Brown thinks too little of himself while Calvin thinks too much of himself. But in each case the self sits at the root of their preoccupations. And we smile at Charlie Brown and Calvin because we see ourselves so clearly in them.

And yet, it must be stated stated that Calvin and Hobbes does not present an overt and systematic theological worldview. Rather, Calvin and Hobbes is best read as posing theological questions rather than providing answers. One of the themes of Calvin and Hobbes is Calvin’s continual confrontation with epistemic horizons. He is often attempting to forecast the future while rushing, with Hobbes, headlong down a hillside in a wagon. He is continually terrorized by what lives under his bed. These are not theological propositions but they speak to our theological situation.

Aside from the overanalysis, I’m a bit bemused by this:

Calvin and Hobbes appeared from November 18, 1985 to December 31, 1995. I was in college and graduate school during those years, a bit too busy to notice or keep up with the Calvin and Hobbes phenomenon.

We were in college and grad school at almost exactly the same time and I did a stint as an Army officer in between.  Somehow, I managed to both notice and keep up with the Calvin and Hobbes phenomenon.  Then again, Beck seems to have been a bit more productive as a scholar.