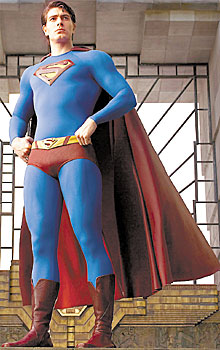 Some might say the new Superman Brandon Routh is growing into his role remarkably well. The all-new film sequel, provisionally titled Superman Returns, is not out until next year but this sneak preview of Routh, 25, in his superhero costume, shows that he carries off the look with style. Muscled Routh does not need any fake padding to fill out his skin-tight costume.

The American soap actor was a relative unknown before he landed the part, made famous by Christopher Reeve. But as USA Today says: “The look of Superman literally rests on the broad and buff shoulders of newcomer Routh.” Director Bryan Singer, whose credits include the hit X-Men, says Superman’s heroism depends on his extraordinary physique. “With X-Men, although they had extraordinary powers, they also had physical weaknesses,” he said. “The suits were for protection as well as costume. Superman is the Man of Steel. Bullets bounce off him, not his suit.”

That’s true, although Superman’s powers don’t come from his physique per se but rather the lower gravity and yellow sun of Earth vice Krypton. And, surely, the role of Superman was famous long before Christopher Reeve played in the first Superman movie in 1978. The character debuted in Action Comics #1 in June 1938 and had been the subject of numerous animated movies and a long-running television series starring George Reeves.

Picture Gallery of Superman actors past and present, including Christopher Reeve, Dean Cain (“Lois and Clark”), and Tom Welling (“Smallville”). Oddly, George Reeves is not included.