Frank Jacobs explains how "in German, you can tell with some degree of certainty which general area someone hails from by the way they tell the time at quarter past ten."

Germans have a reputation for punctuality. Is that why they have so many ways of telling the same time? If it’s 10:15 in the germanosphere, you’ll have at least four options of expressing that particular moment. Those four options are all regional variants, so that, in German, you can tell with some degree of certainty which general area someone hails from by the way they tell the time at quarter past ten. 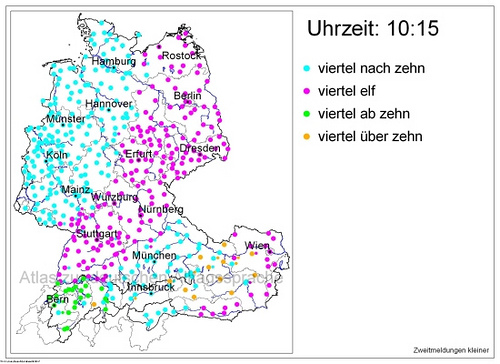 This isogloss map shows that in a large part of north-western Germany, from the Danish to the French border, the preferred option is viertel nach zehn (‘quarter after ten’). This viertel is considered a fixed point in time, and its point of reference is the previous full hour.

Remarkably, the eastern boundary of this area is to a large extent identical to the former border between West and East Germany. It includes all or most of the German Länder of Schleswig-Holstein, Hamburg, Bremen, Lower Saxony, North Rhine-Westphalia, Hessen, the Rhineland-Palatinate and the Saarland (as well as Luxembourg and the German-speaking area of Belgium).

In what used to be East Germany , the same clock time is referenced as viertel elf (‘quarter eleven’). This viertel is not a point in time, but a period of time, i.e. one-fourth of the next hour. This area doesn’t stop at the former German-German border, but extends into northern Bavaria and Baden-Württemberg.

An option limited to German-speaking Switzerland  is to call this particular time viertel ab zehn (‘quarter from ten’). Like the first viertel, this one is distanced from the previous hour by a preposition, albeit not a unidirectional one. In theory, this moment could both be before or after ten. Common usage will probably make such confusion improbable (although it would be interesting to know whether this option is as unambiguous for non-Swiss German speakers).

Another national Option is viertel über zehn (‘quarter over ten’), used only in central parts of Austria (5). In much of the rest of Austria, as well as in adjoining parts of Germany (southern Bavaria) and Italy (southern Tyrol), we see the recurrence of the north-western option, whereas the east and south of Austria repeat the East German option.

Most of my time in Germany was spent in Rheinland Pfalz or Hessen, so the “viertel nach zehn” variant is what I learned. Unless my memory is failing me (and it has been almost two decades), “viertel elf” was 10:45, that is “a quarter to eleven.”

Although I wonder if this is distinction still matters? In the United States, at least, the ubiquity of digital time-telling devices (whether it be watches, mobile phones, or the computer) has just about wiped out folksy variants in favor of precise numbers:  “ten-thirteen, ten-fourteen, ten-fifteen” and so on.