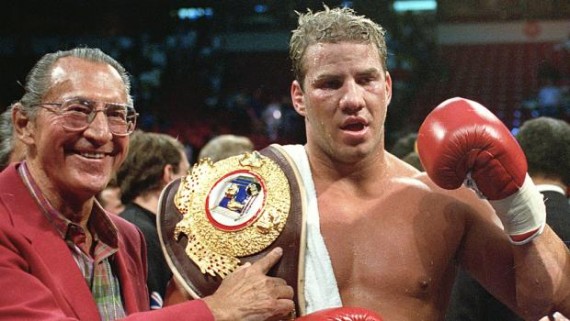 Morrison’s longtime promoter, Tony Holden, said Morrison died at 11:50 p.m. with his wife, Trisha, beside him.

Morrison tested positive for HIV in 1996 before a fight with Arthur Weathers, effectively ending his boxing career. In the years that followed, he denied having HIV and also challenged the existence of the virus.

Trisha Morrison, who married Morrison in 2011, picked up that fight, and in a recent interview with ESPN.com insisted that Morrison had Guillain-Barre Syndrome, not HIV.

In 1993, Morrison beat George Foreman to win the World Boxing Organization heavyweight title. He lost to Lennox Lewis in 1995.

He also gained fame for his role in the 1990 movie “Rocky V,” in which he portrayed “Tommy Gunn,” a rookie boxer who is trained by Rocky Balboa, portrayed by star Sylvester Stallone. Morrison, as Gunn, goes on to win the heavyweight title in the movie and then later fights and loses to his mentor.

Morrison was born in Arkansas and grew up in Oklahoma.

At the time of Morrison’s HIV test, it was generally considered a death sentence. But treatment protocols were already emerging that have allowed HIV-positive people to leave more-or-less normal lives indefinitely.