Speaking of Phil, he also has an interesting piece in Slate, Tomorrow’s Soldier Today – Robot soldiers! Bird-sized airplanes! The Phraselator! At DARPATech, the military shows off its coolest gadgets. Most noble is this:

In addition to building better machines, DARPA also wants to build better soldiers. American infantrymen since the Revolutionary War have griped about all the gear they have to carryÃ¢€”sometimes more than 100 pounds. Enter DARPA, with the idea of building an exoskeleton capable of supporting this weight and providing a powered system of robotic legs to help the soldier carry the load. Researchers from University of California at Berkeley are showing off their Lower Extremity Exoskeleton, which straps onto a soldier’s legs and lets him (or her) carry a load of 85 pounds without feeling it. The Berkeley team has tested it and plans to have a fully functional prototype by December 2005.

Of course, that’ll just give the Army an excuse to make soldiers carry more gear. . . . 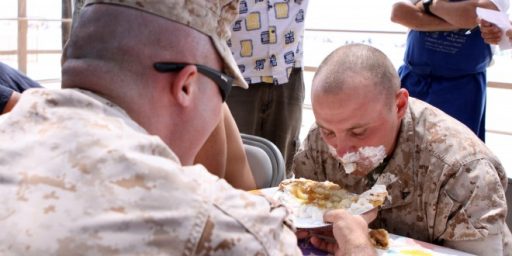