Trent Lott is resigning mid-term, reportedly in order to get out ahead of more restrictive ethics laws. NBC News has learned that Sen. Trent Lott, R-Miss., the minority whip is in the midst of informing close allies that he plans to resign his senate seat before the end of the year. It’s possible a formal announcement of his plans could take place as early as today.

Lott’s office initially denied that he he would step down, but subsequent requests for information about his plans went unanswered.

While the exactly reason Lott is stepping down before he finishes his term is unknown, the general speculation is that a quick departure immunizes Lott against tougher restrictions in a new lobbying law that takes effect at the end of the year. That law would require Senators to wait two-years before entering the lucrative world of lobbying Congress.

Martin Kady II and Josh Kraushaar for The Politico:

The announcement took Capitol Hill by surprise because Lott, the former majority leader, seemed to be relishing his job as minority whip, the second-ranking GOP leadership job. He had regained a post in leadership after he resigned following racially insensitive remarks at a birthday party for the late Sen. Strom Thurmond (R-S.C.).

Lott’s departure opens up a position within Republican leadership, and there could be a fight to replace him. Lamar Alexander, who ran for the position last year, would be a natural candidate, but there are plenty of GOP up-and-comers who could compete for the slot, including Sen. John Cornyn (R-Texas), and Jon Kyl (R-Ariz.), who are part of the current leadership team and could be looking for a promotion to the no. 2 spot in the hierarchy.

Lott would become the sixth Republican senator to announce plans to step down this election cycle. His term expires in 2012; and a resignation would prompt a special election to fill the remainder of his term.

A Republican adviser close to Lott said: “He’s ready to move on. It’s that simple. He only stayed to help through the Hurricane Katrina recovery, and Mississippi is doing well.” Lott lost a beloved house in the hurricane.

No reason for Lott’s resignation was given, but according to a congressional official, there is nothing amiss with Lott’s health. The senator has “other opportunities” he plans to pursue, the official said, without elaborating. Lott was re-elected to a fourth Senate term in 2006.

One hopes that Lott’s health is indeed fine. Resigning in order to pursue a career as a lobbyist, though, would further tarnish his public image. Elections are expensive, wrenching events and create an obligation to serve out the term. It’s considered kosher to leave early to pursue higher elective office, since it ostensibly allows the candidate to better serve his constituents, but doing so for private financial gain is rather unseemly.

Via Memeorandum, which is quickly collecting other blogger reactions. 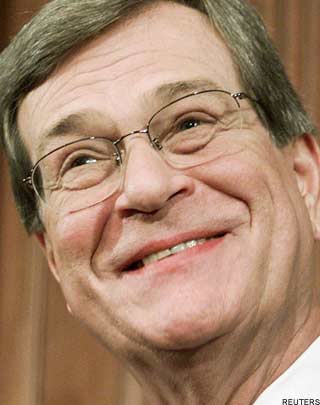