The president's skinny budget would eliminate most funding for science and the arts to fund more Defense spending. 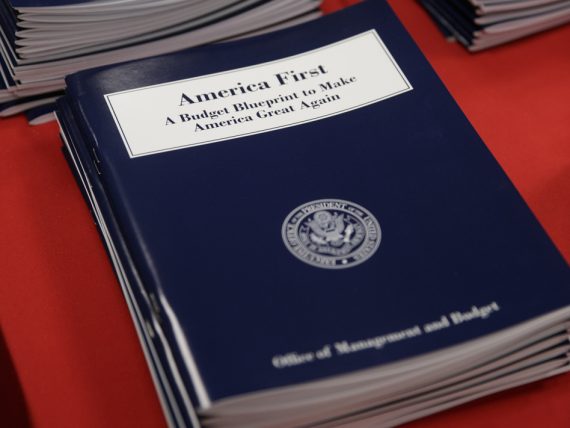 The White House has released “America First: A Budget Blueprint to Make America Great Again.” Apparently, “great” is synonymous for doing away with funding for science, the arts,

WaPo (“Trump federal budget 2018: Massive cuts to the arts, science and the poor“):

Trump’s first budget proposal, which he named “America First: A Budget Blueprint to Make America Great Again,” would increase defense spending by $54 billion and then offset that by stripping money from more than 18 other agencies. Some would be hit particularly hard, with reductions of more than 20 percent at the Agriculture, Labor and State departments and of more than 30 percent at the Environmental Protection Agency.

The cuts could represent the widest swath of reductions in federal programs since the drawdown after World War II, probably leading to a sizable cutback in the federal non-military workforce, something White House officials said was one of their goals.

“You can’t drain the swamp and leave all the people in it,” White House Office of Management and Budget Director Mick Mulvaney told reporters.

As Garance Franke-Ruta observes, “As far as I can tell the main goal of the Trump budget is partisan job destruction: cutting max govt. jobs potentially held by liberals or Democrats.”

The NYT (“Donald Trump Budget Slashes Funds for E.P.A. and State Department“) indicates how unlikely much of this is to actually be passed:

The budget outline, to be unveiled on Thursday, is more of a broad political statement than a detailed plan for spending and taxation. But it represents Mr. Trump’s first real effort to translate his bold but vague campaign themes into the minutiae of governance. The president would funnel $54 billion in additional funding into defense programs, beef up immigration enforcement and significantly reduce the nondefense federal work force to further the “deconstruction of the administrative state,” in the words of Mr. Trump’s chief strategist, Stephen K. Bannon.

Yet for all its headline-grabbing bold strokes — and the White House claims that it will reset the process of Washington policy making — major elements of the plan have already been declared dead on arrival by the Republican leadership in Congress, and much of the fiscal fine print will be filled in by Capitol Hill lawmakers and their aides over the next month.

House appropriations subcommittees began reviewing the plan late Wednesday. Among the cuts: drastic reductions in the 60-year-old State Department Food for Peace Program, which sends food to poor countries hit by war or natural disasters, and the elimination of the Department of Transportation’s Essential Air Service program, which subsidizes flights to rural airports.

The plan to be released at 7 a.m. tomorrow is a “skinny budget,” a pared-down first draft of the line-by-line appropriations request submitted by first-term administrations during their first few months. A broader budget will be released later in the spring that will include Mr. Trump’s proposals for taxation as well as the bulk of government spending — Social Security, Medicare, Medicaid and other entitlement programs.

Mr. Trump’s version is likely to be even skinnier than usual, a result of the chaos, inexperience and staffing problems encountered by the Trump White House over the first two months.

Even with Republican majorities in both Houses of Congress, this will be dead on arrival. Still, it’s a rather stark break from the governing consensus going back generations.