I find the rather nonchalant gassing of the protestors by the police officer, as if he is sparying his roses for aphids, to be disturbing. 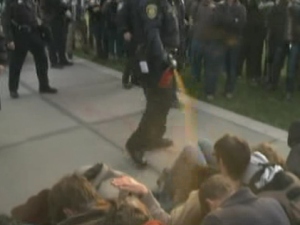 Recognizing that police have to right to remove protesters if they are lawfully ordering them to leave, if force is necessary, the amount applied has to be commensurate to the actions being utilized by the protestors.

As such, when students at UC Davis sat down and linked arms to obstruct police who were trying to disassemble a Occupy camp ground, I can see a legitimate argument for arresting the students engaged in the action (although the degree to which the police even being there is necessary is another issue entirely).  After all, civil disobedience can result in arrest (indeed, is often a goal).

However, I see no justification for pepper spraying persons peacefully sitting on the sidewalk.  There was no indication that those blocking the sidewalk were going to resist arrest in some violent fashion.  Further, had they done so, the pepper spray was obviously available for immediate deployment.

I find the rather nonchalant gassing of the protestors by the police officer, as if he is sparying his roses for aphids or somesuch, to be disturbing.

“If you look at the video you are going to see that there were 200 people in that quad,” said Chief Spicuzza. “Hindsight is 20-20 and based on the situation we were sitting in, ultimately that was the decision that was made.”

Authorities are still reviewing video of the incident, Spicuzza added.

Officers left the quad after making 10 arrests, nine of which were UC Davis students. Law enforcement retreated out of the field in a direction that was not obstructed by sitting protesters.

I have to wonder that if in many of these cases the authorities would be better off just ignoring these “occupations” and letting them die of inertia.  But, I am also aware of real problems, like sanitation.

FILED UNDER: Policing, US Politics, CBS