US Women Win More Olympic Medals Than All But Three Countries

How dominant were America's women in the London Olympics? They'd have come in fourth place in the medal count in the US sent separate men's and women's teams.

How dominant were America’s women in the London Olympics? They’d have come in fourth place in the medal count in the US sent separate men’s and women’s teams. 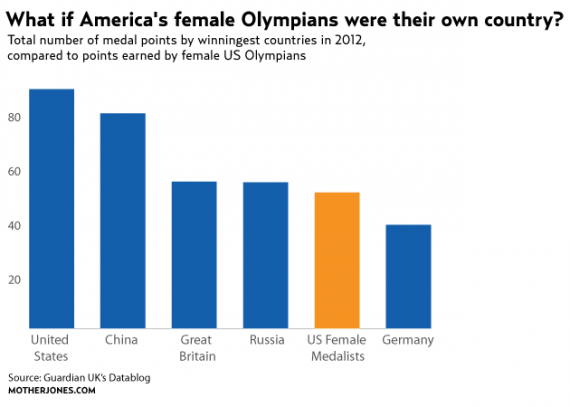 Mother Jones (“US Female Olympians Have Won More Medal Points Than All But Four Countries“):

In fact, if American women were their own country, they’d be fifth in the overall count of medal points right now.

Now, the list is a bit misleading. They’re crediting individual medals for team sports, meaning that they’re giving the US women credit for 11 medals in soccer even though it was a single event. The count would be further inflated had they credited the medals for basketball but the chart was published in the wee hours Sunday morning.

Regardless, it’s an impressive performance. Whereas the American men are still also-rans in soccer, the women’s team has been contenders for Olympic gold and World Cups since the competition opened. And the women’s basketball team is still almost as dominant today as the Dream Team was in 1992. Most countries simply aren’t investing in women’s sports to anything near the degree that the United States has and the results speak for themselves.