The United States has relinquished its last outpost in the Demilitarized Zone to South Korea and cut troops there as part of a deal to give Seoul more responsibility for guarding the tense border with the North. The change, which took effect at midnight on Sunday, is part of a much bigger picture in which the United States is cutting its forces on the divided peninsula by a third from 37,500 and moving bases further south away from the border. “As previously agreed, transferring the role of security work at Panmunjom has been completed,” a spokesman for the U.S. military command, Kim Yong-kyu, told Yonhap news agency on Monday. Kim later told Reuters it was all part of a larger mission transfer, a reference to Washington’s desire to reshape its forces and Seoul’s intention to boost its defense capabilities.

Although seemingly arcane, any changes in the Demilitarized Zone are potentially destabilizing because it is the world’s most militarized frontier and a potential Cold War-style flashpoint closely watched by financial markets. Some 1.1 million North Korean troops face 680,000 from the South. The United States sharply cut its troop presence in the Panmunjom truce village, also known as the Joint Security Area, to fewer than 40 from 220, although the U.S.-led United Nations force will ultimately control the 550-strong unit. The U.S. military also handed over nearby Observation Post Ouellette, its last remaining guard post along the border and a popular photo-opportunity destination for U.S. presidents wanting a close-up glimpse of the North just meters (yards) away. Little outward change was to be seen at Panmunjom on Monday, although the forward base just outside the Demilitarized Zone is now a South Korean camp. 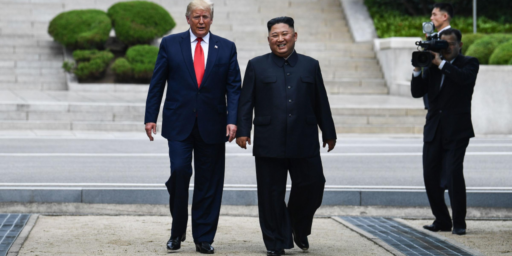