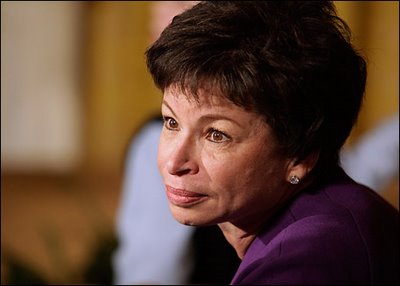 According to our tipster, Jarrett was seated at the head table along with several other big-name politicians and a handful of high-ranking military officials. As an officer sporting several stars walked past Jarrett, she signaled for his attention and said, “I’d like another glass of wine.”

White House economic adviser Austan Goolsbee, who was seated next to Jarret, began “cracking up nervously,” our tipster said, but no one pointed out to Jarrett that the man sporting a chestful of medals was not her waiter.

“The guy dutifully went up and got her a glass of wine, and then came back and gave it to her and took a seat at the table,” our tipster said. “Everyone is in tuxedos and gowns at this thing, but the military people are in full dress uniform.”

All we have is an anonymous tipster to a conservative blogazine, so it’s not the most definitive story in the world.  But it’s certainly plausible.

Jarrett has spent most of her life in Chicago and was educated at Stanford and Michigan Law, so she probably hasn’t spent a great deal of time around the military.  Still, you’d think any reasonably intelligent 54-year-old would be able to distinguish a general in full dress from hotel waitstaff.