Dr Jack Boyle, a psychologist, believes such television images will desensitise us to the “real” horrors of violent sudden death.

He said: “Television makes everything a piece of theatre, entertainment. We have a choice today Ã¢€¦ Wimbledon Ã¢€¦ FA Cup Final Ã¢€¦ Gulf war. We accept it as part of life, quite unreal, and this is contributed to with other things.

“For example, we are at war with Iraq and we have correspondents in Baghdad. Imagine a BBC crew in Berlin in 1944: Ã¢€˜And now over to the FÃƒ¼hrer to get his view on this Normandy advance.Ã¢€™”

Dr Robin Clifton, a specialist on war and society at the University of Warwick, claims that what we are seeing may be less than real.

He said: “The images encourage us to believe we are being given a full and frank account of the war, but weÃ¢€™re not. Television is painting a big picture, which they and the military hope will satisfy us – Baghdad ablaze, tanks rolling, missiles scorching.

“ItÃ¢€™s an idea of war, entertainment with the thrill of reality. What the war does prove is the military has advanced in terms of PR by trying to meet televisionÃ¢€™s demands.”

Roy Hattersley, the former Cabinet minister and deputy leader of the Labour Party, believes the coverage is sanitising war.

He said: “Soldiers, women and children are being killed. Perhaps a message reminding viewers of that fact should appear, like a health warning, under the pictures.

“WeÃ¢€™re seeing US marines giving water to captives and bandaging the trivial injury of a child, but the full horror is kept from us.”

Frankly, that strikes me as a good thing.

The observations are thought-provoking, although I’m sure not what to do about the situation. I’ve been to war, have spent years studying it professionally, and yet have still had the television on in the background pretty much non-stop when I’m at home and am checking the ‘net constantly both at home and work. I know that much of the instant information is flat wrong and that, in terms of staying well informed, it would be much more productive to simply check the news a couple times a day. But, as with a sporting event, finding out the “score” and watching the highlight shows later is just not the same as watching it unfold. 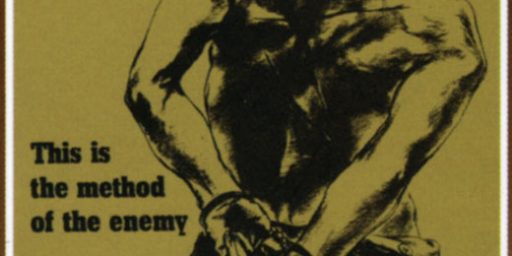