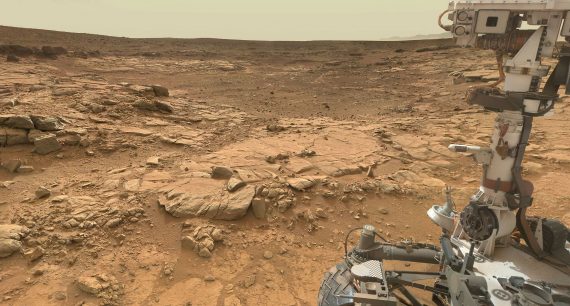 NASA announced today that probes have discovered evidence of flowing water on Mars, a discovery that could have huge implications for science if it turns out to be correct:

Despite its reputation as a forebodingly dusty, desolate and lifeless place,Mars seems to be a little bit wet even today.

Scientists reported on Monday definitive signs of liquid water on the surface of present-day Mars, a finding that will fuel speculation that life, if it ever arose there, could persist to now.

“This is tremendously exciting,” James L. Green, the director of NASA’s planetary science division, said during a news conference on Monday. “We haven’t been able to answer the question, ‘Does life exist beyond Earth?’ But following the water is a critical element of that. We now have, I think, great opportunities in the right locations on Mars to thoroughly investigate that.”

It may be a tipping point for NASA officials who have been reluctant to speculate about the possibility of contemporary life on Mars.

“I can’t imagine that it won’t be a high priority with the scientific community,” said John M. Grunsfeld, NASA’s associate administrator for science, who said a mission in the 2020s could carry experiments to look directly for life.

In a paper published in the journal Nature Geoscience, scientists identified waterlogged molecules — salts of a type known as perchlorates — on the surface in readings from orbit.

“That’s a direct detection of water in the form of hydration of salts,” said Alfred S. McEwen, a professor of planetary geology at the University of Arizona, the principal investigator of images from a high-resolution camera on NASA’s Mars Reconnaissance Orbiter and one of the authors of the new paper. “There pretty much has to have been liquid water recently present to produce the hydrated salt.”

By “recently,” Dr. McEwen said he meant “days, something of that order.”

Although young Mars was inundated by rivers, lakes and maybe even an ocean a few billion years ago, the modern moisture is modest. Scientists have long known that large amounts of water remain — but frozen solid in the polar ice caps. There have been fleeting hints of recent liquid water, like fresh-looking gullies, but none have proved convincing.

In 2011, Dr. McEwen and colleagues discovered in photographs from the orbiter dark streaks descending along slopes of craters, canyons and mountains. The streaks lengthened during summer, faded as temperatures cooled, then reappeared the next year.

They named the streaks recurrent slope linae, or R.S.L.s, and many thousands of them have now been spotted. “It’s really surprisingly extensive,” Dr. McEwen said.

Scientists suspected that water played a critical role in the phenomenon, perhaps similar to the way concrete darkens when wet and returns to its original color when dry.

But that was just an educated guess.

Lujendra Ojha, a graduate student at the Georgia Institute of Technology, turned to another instrument on the orbiter that identifies types of molecules by which colors of light they absorb. But this instrument, a spectrometer, is not as sharp as the camera, making it hard to zoom in on readings from the narrow R.S.L.s.

“We had to come up with new techniques and novel ways to do analysis of the chemical signature,” said Mr. Ojha, the lead author of the Nature Geoscience article.

The researchers were able to identify the telltale sign of a hydrated salt at four locations. In addition, the signs of the salt disappeared when the streaks faded. “It’s very definitive there is some sort of liquid water,” Mr. Ojha said.

The perchlorate salts lower the freezing temperature, and the water remains liquid. The average temperature of Mars is about minus 70 degrees Fahrenheit, but summer days near the Equator can reach an almost balmy 70.

Many mysteries remain. For one, scientists do not know where the water is coming from.

“There are two basic origins for the water: from above or from below,” Dr. McEwen said. The perchlorates could be acting like a sponge, absorbing moisture out of the air, but measurements indicate very low humidity on Mars — only enough for 10 microns, or about 1/2,500th of an inch, of rain across the planet if all of the wetness were wrung out of the air.

The other possibility is underground aquifers, frozen solid during winter, melting during summer and seeping to the surface.

The significance of the possibility of liquid water flowing on Mars today cannot be understated. For one thing, it has generally been the case that wherever we have found water on Earth, we have found life of some kind even if just in the most basic microbial forms. That doesn’t necessarily mean that there is some kind of life in or near the water that has apparently been found here, because the apparent high salinity of that water may make it inhospitable to life. As the article linked above notes, there is a body of water in Antarctica that remains in a near-liquid state year-round despite freezing temperatures because of its high salinity, but because of that high content of salts it is devoid of life. The same thing may be true of these areas of Mars. However, if the water in question comes from below ground, then it could mean that there are some forms of microbial life living below the Maritan surface. Scientists have speculated for some time that there may be water in a solid or liquid form below the soil of Mars, and these RSL’s could be a surface manifestation of that phenomenon. At the very least, this would clearly seem to be something worthy of future investigation.

The existence of water on Mars could also be important for future manned missions to the red planet, both for the purposes of survival and as an aid in getting home. Properly filtered, Martian water could be a vital source of hydration for astronauts on a planet devoid of convenient surface water and may mean that we wouldn’t need to worry about transporting large amounts of water to Mars. Additionally, water combined with electricity can be used to make fuel for rockets, thus giving future astronauts a way to get home without transporting large amounts of fuel, or provide a backup in case of an emergency.

Long before we send astronauts, though, it seems obvious that there needs to be further unmanned exploration of an alien environment that humans would need to survive on for some extended period of time. The next NASA mission is set to send a new unmanned rover to the planet in 2020, and there are at least hopes that part of that project would involve taking samples of Martian soil and rocks and returning them to Earth for closer study. That would obviously be a tremendous technological undertaking all on its own, and its only one step on the road to a manned mission. It’s also further proof for the idea that some of the best work in space research right now is being done via unammed probes. Just in the past year, we’ve seen a probe from the European Space Agency land on a comet, while another NASA probe completed its long journey to Pluto and sent back images from the edge of the Solar System. We’ve also got probes exploring the Asteroid Belt and, of course, Voyagers 1 and 2 on the edges of interstellar space. While everyone seems to be focused on manned spaceflight, which is of course important, the real work is being done by the robots and, in this case, one of those robots may have discovered something that will have profound implications going forward.