Former Secretaries of State James Baker and Warren Christopher take to the op-ed pages of the NYT to call for a new War Powers Act.

A bipartisan group that we led, the National War Powers Commission, has unanimously concluded after a year of study that the law purporting to govern the decision to engage in war — the 1973 War Powers Resolution — should be replaced by a new law that would, except for emergencies, require the president and Congressional leaders to discuss the matter before going to war.

Our proposed statute would provide that the president must consult with Congress before ordering a “significant armed conflict” — defined as combat operations that last or are expected to last more than a week. To provide more clarity than the 1973 War Powers Resolution, our statute also defines what types of hostilities would not be considered significant armed conflicts — for example, training exercises, covert operations or missions to protect and rescue Americans abroad. If secrecy or other circumstances precluded prior consultation, then consultation — not just notification — would need to be undertaken within three days.

To guarantee that the president consults with a cross section of Congress, the act would create a joint Congressional committee made up of the leaders of the House and the Senate as well as the chairmen and ranking members of key committees. These are the members of Congress with whom the president would need to personally consult. Almost as important, the act would establish a permanent, bipartisan staff with access to all relevant intelligence and national-security information.

It should be noted at the outset that, were such a law on the books in 2002, the Iraq War would almost certainly have proceeded exactly as it did. President Bush in fact not only consulted with Congress but got authorization to commence military operations in Iraq at his sole discretion by rather wide margins from both Houses.

In terms of preventing “bad” wars, I’m dubious as well. A determined president can, as has been repeatedly been demonstrated, get legal advice showing him how to navigate the loopholes in the law. And, goodness, this one sounds to have loopholes you can drive a truck through. “Sorry, I couldn’t consult with you guys. Otherwise, the operation wouldn’t be covert, now would it?” “This mission was necessary for protecting Americans abroad. I mean, if Ayatollah Nutsojihad got WMD, American tourists in Israel wouldn’t have been safe at all.” Once hostilities are commenced and American troops are in harm’s way, a Rally ‘Round the Flag effect invariably happens and Congress would be hard pressed to then vote No.

Those rather large caveats notwithstanding, these reforms sound like good ones. First, even if we only established the Super Duper Joint Select Committee on Foreign Policy Stuff and ignored everything else, it would be a major step forward. Now, a dozen preening Committee chairman can easily claim that any given activity falls within their purview and then stage photo-op “hearings” to get their faces on teevee. A consolidated, bipartisan group might actually provide serious advice and gain the trust of the executive to make consultation more attractive.

Second, forcing Congress to vote Yay or Nay would give them skin in the game. As it stands, they can claim they supported a war if it’s popular and distance themselves from it the moment things start to go south. Or they can vote to support the war and then pull a Hillary, claiming that they were only supporting the authority to go to war, not going to war itself.

It’s worth remembering that the 1973 War Powers Act was vetoed by President Nixon and required a two-thirds override to pass. One imagines that the same will be true of this War Powers Consultation Act. Getting that degree of consensus for much of anything is going to be incredibly difficult in the current political climate. 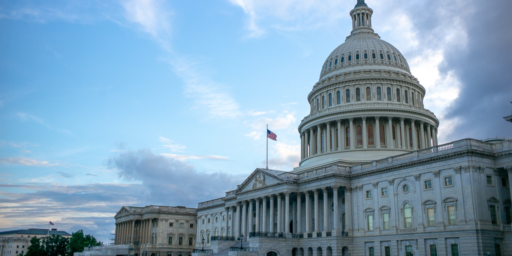