Uni-watch is holding a contest for a redesign of the uniforms for the NFL's Washington Redskins.

Uni-watch’s Phil Hecken is holding a contest for a redesign of the uniforms for the NFL’s Washington Redskins. While he was at it, the uniforms had to reflect a team name other than “Redskins,” which some view as insensitive to American Indians. Among the entrants so far are a USFL-inspired designed for the Washington Federals, an old-school New England Patriots design for the Washington Americans, and variations on the current uniform for a rebranded Washington Warriors franchise.

My favorite of the first 11 submissions was Bruce Genther’s throwback-inspired uniforms for the Warriors: 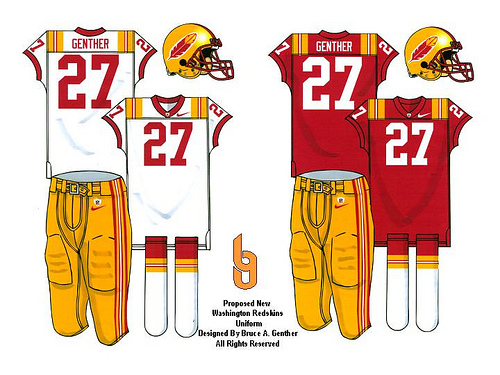 Whether they change their name or not, I think something like this would be an improvement over the Redskins’ current hodgepodge of unis. I especially dislike the unitard variants, wherein they wear white pants with white jerseys or, worse, red pants with red jerseys.

They made a good step in the right direction a couple years back in bringing back the classic gold pants, but only for night games and in something of an electric yellow rather than the more muted shade seen here. Ideally, they’d go back to the darker “burgundy” rather than the lighter red, too, but this color has been the standard for over thirty years now.