The UNODC has released the latest World Drug Report. Shockingly, there are a lot of drugs out there and a lot of money to made trafficking in them.

Greg Weeks notes that the new World Drug Report [PDF] has been released by the UNODC.  I have only started going through it, and will likely have more to say on its contents at a later date (although, on balance, not a lot is new).

First, I would note a quote that Greg noted:

Since the 1960s, and in a context of rapid and deep socioeconomic changes throughout the world, the international drug control system has succeeded in containing the spread of annual illicit drug use to around 200 million people, or 5% of the world population aged 15-64. This compares very favourably with the much higher prevalence of tobacco use, which causes 5.4 million deaths per year (31).

First, I concur with Greg’s assessment:  “Can this really be considered a “glass half full” situation?  That only 200 million people use drugs?”  Indeed.

Second, the assertion of the statistic does not actually prove that anti-drug policies are responsible for the number not being higher.  It is entirely possible that there are only so many people willing to try and use drugs in the first place, regardless of international policy (indeed, some studies assert this).  One suspects that many who read this words, for example, would never have tried cocaine or heroin even without the war on drugs because of the known risks associated with those substances.

Next, I would note the following graph, which gives one an idea of the money involved: 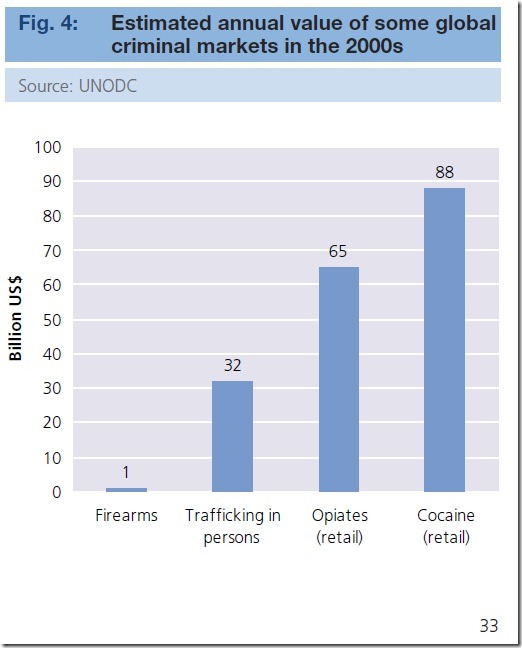 So, the annual retail value of just the cocaine and opiates markets is $153 billion per annum.  Such numbers exclude profits from cannabis, meth, ecstasy and any number of other substances.  That figure is the place to start when seeking to understand why the War on Drugs persists and why there is no end in sight.

FILED UNDER: World Politics, cocaine, the 1960s, war on drugs