One of West Point's first female graduates has married her long-time girlfriend at the Cadet Chapel. 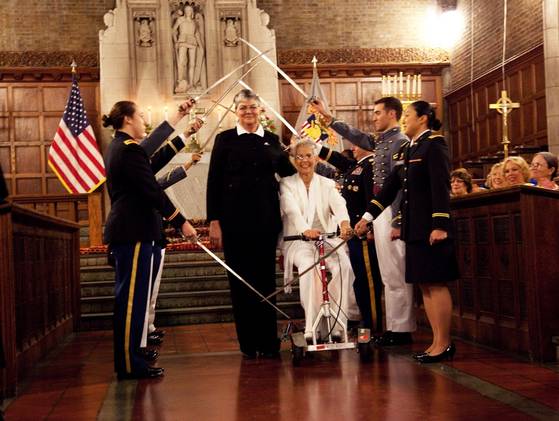 One of West Point’s first female graduates has married her long-time girlfriend at the Cadet Chapel.

Penelope Gnesin and Brenda Sue Fulton, a West Point graduate, exchanged vows in the regal church in a ceremony conducted by a senior Army chaplain.

The ceremony comes a little more than a year after President Obama ended the military policy banning openly gay people from serving.

The two have been together for 17 years. They had a civil commitment ceremony that didn’t carry any legal force in 1999 but had longed to formally tie the knot.

The couple live in New Jersey and would have preferred to have the wedding there, but the state doesn’t allow gay marriage.

Fulton said that when she requested the West Point chapel, she was told that none of the chaplains who preside there come from a denomination that allowed them to celebrate a gay marriage. Their marriage was officiated by a friend, Army Chaplain Col. J. Wesley Smith of Dover Air Force Base.

Fulton, a veteran and the communications director of an organization called OutServe — which represents actively serving gay, lesbian and bisexual military personnel — confirmed in an e-mail to USA TODAY Friday night: “We will be the first same sex couple to wed at the Cadet Chapel at West Point.”

The wedding was the second gay marriage West Point has hosted. The first was a small, private ceremony last weekend between two of Fulton’s friends in a smaller venue on the campus.

In September 2011, the Pentagon issued guidance stating that “determinations regarding the use of DOD real property and facilities for private functions, including religious and other ceremonies, should be made on a sexual-orientation neutral basis, provided such use is not prohibited by applicable state and local laws.”

The policy change came with the caveat that the use of a military facility does not constitute an endorsement of gay marriage by the Defense Department.

In July 2011, President Obama named Fulton to the West Point Board of Visitors, making her the first openly gay member of the board that advises the Academy.

She graduated from West Point in 1980, part of the first class of cadets that included women, and later founded an organization called KnightsOut, which describes itself as “an organization of West Point Alumni, Staff and Faculty who are united in supporting the rights of Lesbian, Gay, Bisexual and Transgender soldiers to openly serve their country.”

It’s fitting that Fulton, a pioneer for women at the Academy, would lead the way here. And, certainly, as a West Point graduate, the Cadet Chapel is a fitting place for her nuptuals.

I’m a bit hazy, however, as to how a military chaplain can conduct a same-sex wedding on a federal military installation while the absurdly named Defense of Marriage Act remains law. Under DOMA, a marriage is a legal union of one man and one woman. While various parts of it have been deemed unconstitutional by lower courts for enforcement in a variety of circumstances, that fundamental precept remains operational. The matter is certainly ripe for the Supreme Court to settle.