Why Do Airline Seats Recline?

Reclining your seat comes at the expense of your fellow traveler's knees. Why is it an option? 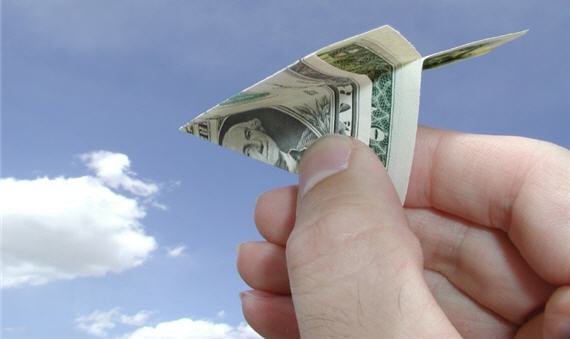 Those of us over a certain height constantly complain about the cramped conditions in coach class airline seating. Dan Kois argues that one way to alleviate the problem is to remove the ability to recline seats into the knees of the person sitting behind you.

Ding! Instantly the jerk in 11C reclines his seat all the way back. The guy in 12C, his book shoved into his face, reclines as well. 13C goes next. And soon the reclining has cascaded like rows of dominos to the back of the plane, where the poor bastards in the last row see their personal space reduced to about a cubic foot.

Or else there are those, like me, who refuse to be so rude as to inconvenience the passengers behind us. Here I sit, fuming, all the way from IAD to LAX, the deceptively nice-seeming schoolteacher’s seat back so close to my chin that to watch TV I must nearly cross my eyes. To type on this laptop while still fully opening the screen requires me to jam the laptop’s edge into my stomach.

Obviously, everyone on the plane would be better off if no one reclined; the minor gain in comfort when you tilt your seat back 5 degrees is certainly offset by the discomfort when the person in front of you does the same. But of course someone always will recline her seat, like the people in the first row, or the woman in front of me, whom I hate. (At least we’re not in the middle seat. People who recline middle seats are history’s greatest monsters.)

It’s time for an outright ban on reclining seats on airplanes. I’m not demanding that airlines rip out the old seats and install new ones; let’s just extend the requirement that seats remain upright during takeoff and landing through the entire flight. (Unlike the stupid electronic-devices rules, there is an actual good reason for this regulation: Upright seats are safer in a crash, and allow for easier evacuation.) To those who say such a rule is unenforceable, I respond: Kick. Kick. Kick.

I infer from this that Dan Kois is not afflicted with lower back trouble.  I would not be better off if no one reclined; rather, I would be hobbling off the plane in agony, looking forward to a day or so of recuperating in the hotel room. Sitting bolt upright for a long flight can leave me near-crippled for days, as I once found out through an unwise seat selection.

Which is presumably why the airlines have chosen to keep the reclining chairs.  A large proportion of the US population has lower back trouble, and while you might find a seat reclining into your space inconvenient, the people who’d have to spend three vacation days in the hotel room care a whole lot more than you do.

Ultimately, then, her advice for people like Dan and myself is: pay extra for seats with more leg room. But that’s not an option for most of the flying public; business class is absurdly expensive and even the seats with a sckosh more legroom come at quite a premium. And, as Megan acknowledges, the latter are not widely available.

The reasonable solution would be to install slightly pre-reclined, fixed pitch seating. Spirit did this a couple years back. Put people’s backs in a relatively comfortable position and keep a constant distance between the seatback and the knees. It would still be too tight for tall people but it would at least have the virtue of preventing that crushing sensation when the person in front reclines.