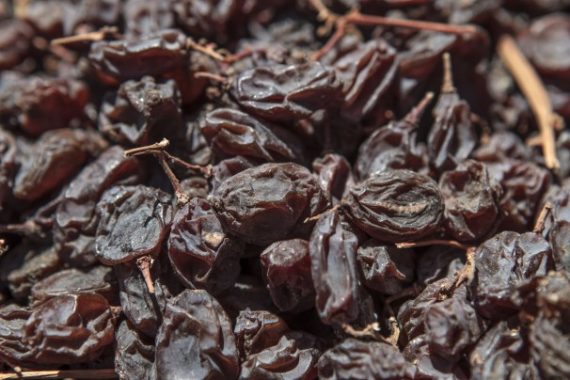 Until I read about a Florida Congressman who wants to eliminate it, I had no idea the United States has a “raisin reserve,” and I’ve got to wonder why it ever existed in the first place:

A Florida congressman has introduced a bill that would eliminate one of the U.S. government’s most unusual institutions: the Raisin Administrative Committee, keepers of the national raisin reserve.

The raisin reserve is a program established by the Truman administration which gives the Agriculture Department a heavy-handed power to meddle in the supply and demand for raisins.

To limit the supply of raisins on the market, the government can simply take tons of raisins from the farmers who grew them. The raisins go into a “reserve.” They are often kept off the U.S. market: sold overseas, perhaps, or given to needy schoolchildren.

Sometimes, the farmers don’t get paid a cent in return.

A decade ago, California farmer Marvin Horne defied the reserve, refusing to hand over his raisins to the government. The Agriculture Department took him to court, and this year the case reached the U.S. Supreme Court.

The high court sent Horne’s case back to an appeals court in California, which will soon hear Horne’s argument that the Constitution prohibits government from taking his raisins without just compensation. Horne’s case was featured in a Washington Post article in early July.

On Thursday, Rep. Trey Radel (R)introduced a bill that would eliminate the reserve’s legal underpinnings. It would end the 1949 rule, Marketing Order 989, that created the Raisin Administrative Committee and the reserve.

“In my opinion, this is nothing short of theft,” said Radel, a freshman member from the Fort Myers area. He said he had no ties to the raisin industry or to raisin farmers, mainly located thousands of miles away in Northern California.

There does seem to be something rather unjust about a program that allows the Federal Government to step in and seize a farmer’s crops without any compensation. Indeed, it’s hard to see how such a program would not be considered a violation of the Constitution’s requirement, as set forth in the Fifth Amendment, that property cannot be taken without “just compensation.” More importantly, though, it’s hard to see where the other part of the 5th Amendment’s Takings Clause requirement, that the taking be for a “public use,” is satisfied by a program like this. On it’s face this seems to be a nothing more than an effort by the Federal Government, with the approval of the major growers no doubt, to manipulate the price of an agricultural product by artificially manipulating its supply. How that it is conceivably Constitutional is completely beyond me. And, as a practical matter, I can’t think of any conceivable reason why the price of raisins is something that the United States Congress and the Department of Agriculture ought to be concerning itself with.

No doubt this program is heavily supported by the Congressmen and Senators from those parts of the country where raisin growing is a major industry, so I would expect that even though Congressman Radel has a very good idea here, it’s not likely to go anywhere.

FILED UNDER: Congress, Economics and Business, Quick Takes, US Politics