I always like posting on Intelligent Design as it always seems to drive those who think it is a big deal up the wall…and I admit I gain some amount of pleasure from seeing this. Anyhow the typical response is that Irreducible Complexity (IC) provides a very serious challenge to evolutionary theory. This is just simply not the case. Irreducible pathways can be explained as follows: Duplication and Loss of Function. Here is the idea in some simple pictures. 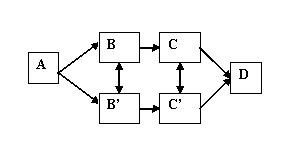 Notice that we can get from A to D a variety of ways. The nodes B’ and C’ are duplicates of B and C. Now via mutations the pathway becomes, 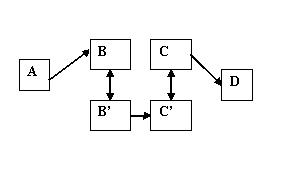 Notice that now we have to go through each node, whereas before we did not. This pathway is IC. Remove any part (i.e. node) and the pathway no longer functions. Does loss of function happen in nature? Yes. Does duplication? Yes. Do we need to invoke a supernatural designer? No. The Principle of Parsimony tells us we don’t want to make any hypothesis any more complicated than it needs to be. Hence IC is not a problem for evolutionary theory.

PZ Myers at Pharyngula does a much better job of explaining this. You can also find out more here. For even more, there is the Creationist Claims FAQ. Oh, and no, this does not mean you must become an atheist, that is just Creationist propaganda.

Update: In comments Joe Carter argues that somehow I’ve missed the point that removing A, B or C renders the pathway inactive. I don’t see how Joe can come to the conclusion that I’ve missed this point given that I have written,

Notice that now we have to go through each node, whereas before we did not. This pathway is IC. Remove any part (i.e. node) and the pathway no longer functions.

In other words, I was writing that removing A, B, B’, C, or C’ renders the pathway non-functional. In short, I did not “miss the point”. However, I think it is fair to say that Joe has missed the point as he has left the main conclusion completely intact; that the evolution of IC systems is not impossible.