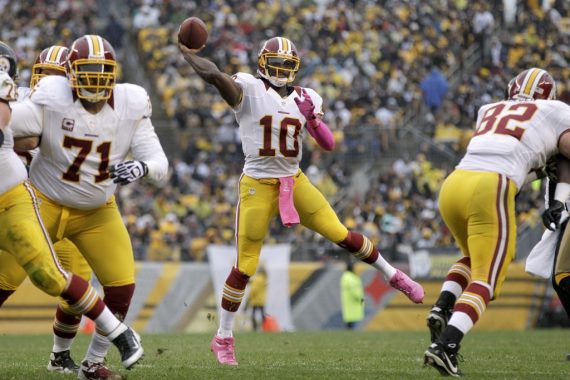 Shortly, the Washington Redskins will be playing the Carolina Panthers at home in a game that they’re widely expected to win (although, this being the Redskins, that’s by no means assured.) If the Skins do win, at least one electoral harbinger says it could be good news for President Obama:

If history holds true, a Redskins victory would mean another four years for President Obama. A Redskins loss would mean a victory for Mitt Romney.

You may have heard of this. It’s called the Redskins Rule.

Since 1940 — when the Redskins moved to D.C. — the team’s outcome in its final game before the presidential election has predicted which party would win the White House each time but once.

When the Redskins win their game before the election, the incumbent party wins the presidential vote. If the Redskins lose, the non-incumbent wins.

The only exception was in 2004, when Washington fell to Green Bay, but George W. Bush still went on to win the election over John Kerry.

Well, people have been saying this election is looking like a repeat of 2004, haven’t they?

Personally, I’ll be rooting against the Redskins. Not because of what it means for the election, but because I’m a Giants fan and it’s in my blood.

Update: The Redskins lost 21-13. I still think Obama will win the election.