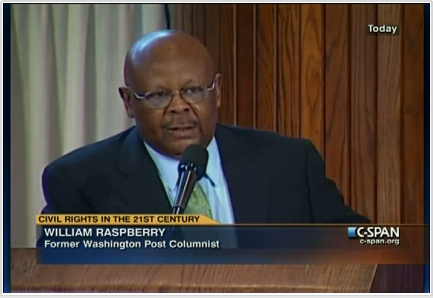 The Washington Post, which published him for decades, eulogizes him as “William Raspberry, a columnist who listened respectfully to other views.”

William Raspberry, who died Tuesday at the age of 76, demonstrated that civility and principle can co-exist, that passion doesn’t preclude compromise and that people can hold on to their convictions without insisting that anyone who disagrees is evil. His way of stating his opinions with an understanding that they might sometimes be wrong, and of listening respectfully to other views, distinguished Mr. Raspberry during four decades of writing commentary for The Post, and it is particularly missed today.

Mr. Raspberry was a pioneer in many ways. When The Post hired him, fresh out of the Army, in 1962, there weren’t many African Americans working in the newsroom; he started as a teletype operator. He soon became a reporter and began writing columns not long after that, for the local news section at first and from 1970 on, for the op-ed page. When he started, only one black columnist, Carl Rowan, was nationally syndicated and widely read.

Mr. Raspberry, who had grown up in segregated Mississippi, used his column to educate readers about race and racism, but he never limited himself to those topics. He was a passionate advocate of civil rights who never let anyone dictate his agenda. He became a mentor to many younger African American reporters who were breaking barriers, but not only to them: Journalists of every race and age benefited from his wisdom and advice.

His columns covered just about every imaginable topic, often with a sly humor that punctured the pomposity of this city, but he always returned to the subjects of opportunity and education. When he quit writing, characteristically it was to focus on those, and in the most concrete way possible; he set up a foundation to help prepare the youngest children in his little Mississippi hometown to succeed, and he became heavily involved in its day-to-day operation. “I still believe in the magic of education, a belief instilled in me by my teacher-parents,” he explained in his final regular column in 2005. “It scares me that the parents of so many young children today don’t believe in the magic.”

But it was in a column one week before his last that Mr. Raspberry mused about his refusal to consider as enemies those who disagreed with him. “I once enjoyed delivering the hard zinger,” he acknowledged. “What happened? Did I grow up? Did age mellow me out? Have I lost a certain zest for combat?”

If so, he answered himself, it was because he had become “more and more convinced that the sharp debates and exaggerated differences were exacerbating the political division I find so dangerous in America, and I was also starting to imagine — conceit? — that talking about issues might actually make a positive difference, might move us an inch or two nearer common ground.

“Perhaps it was then that I found myself trying to write in such a way that people who didn’t agree with me might at least hear me. Then I found that they were talking back to me in similarly civil tones. And it felt good.”

It felt good to his readers, too.

Indeed. While I generally disagreed with Raspberry, I usually found him to be thoughtful, fair, and good humored. A classic of the form was a 1999 column making fun of of those who found racial slight in the use of the word “niggardly,” which has nothing to do with race, or “tar baby,” which only incidentally did.

Boy, where could you go with that one? Would Christmas carolers be charged with homophobia for singing “Don we now our gay apparel”? Can our kitchens no longer be spic and span? Are we forbidden to sing doo-wop, lest we expose the chink in our armor?

A smart-aleck black friend of mine used to refer to those little mites that burrow into your skin and itch like the devil as “cheegroes.” I thought it was funny.

Later in the piece, he counsels us “not to be so quick on the treegro” in these situations.  Alas, not many columnists follow that advice these days.

The Question We Should Be Asking

Raspberry: Roberts Too Rich for Court