Wow: Metrodome Collapses Due to Snow

I read the AP headline and story (Minn. Metrodome roof collapses in Midwest blizzard), but didn’t really didn’t get the full impact of it until I saw the video.

UPDATE (James Joyner): As if I needed another sign that I was getting old, my initial reaction to this was, “Again?!”  It seems that the Metrodome is constantly collapsing.   Well . . . not so much.  An AP report notes that, “It was the fourth time the Teflon roof has failed in the Dome’s history, but the first time since 1983.”  That was 27 years ago!  But it was a constant occurrence way back then:  “The Metrodome roof deflated in 1981, 1982 and 1983, each time due to tears caused by heavy snow. The April 14, 1983, collapse forced the postponement of the Twins’ game with California, which had been the only postponement. A slight tear also delayed a Twins game briefly in 1986.” 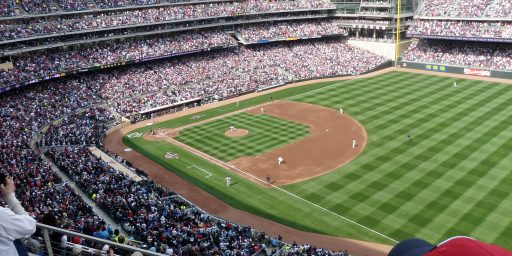