Fourteen year old Tianlang Guan has made the cut and will play in the final two rounds of this year’s Masters Tournament:

Tianlang Guan stunned the golf world with a 73 on Thursday at Augusta, so it was no surprise that the 14-year-old backed it up with a 75 on Friday morning. He’s 4 over for the tournament and ended up making the cut.

The big story from his round, however, was that he was pushed to 4 over because he was assessed a one-stroke penalty on hole No. 17 for slow play.

According to a statement from Augusta National, Guan “began being timed” on No. 12 and was given a warning on No. 13. He was then penalized on No. 17, when “he again exceeded the 40-second time limit by a considerable margin.”

With how big of an issue slow play has become, it seems a little ridiculous that this is the first time this penalty has been enforced in 10 years.

After his round, Guan told ESPN:

“I respect the decision. Still a wonderful experience for me. I enjoyed this week so far. I think I did a pretty good job.”

He also said he switched clubs multiple times on No. 17 because the wind kept changing and was then given the penalty.

The penalty aside, which is perhaps understandable for a kid playing in the most prestigious golf tournament in the United States, this is a pretty amazing experience. Good  for you, kid. 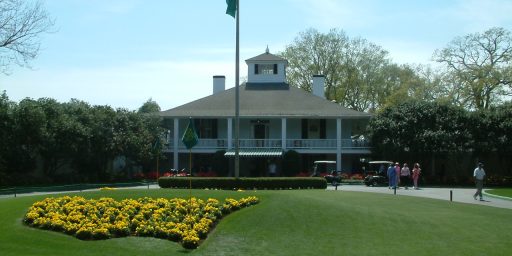