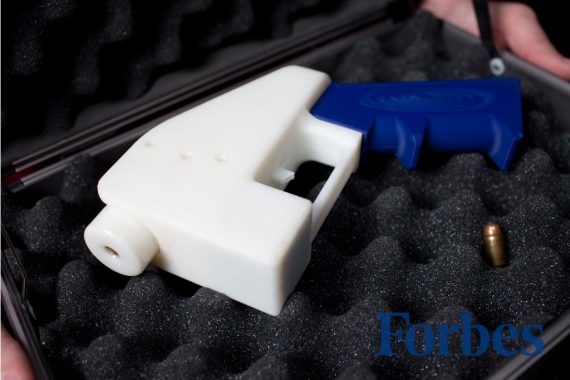 Early next week, Wilson, a 25-year University of Texas law student and founder of the non-profit group Defense Distributed, plans to release the 3D-printable CAD files for a gun he calls “the Liberator,” pictured in its initial form above. He’s agreed to let me document the process of the gun’s creation, so long as I don’t publish details of its mechanics or its testing until it’s been proven to work reliably and the file has been uploaded to Defense Distributed’s online collection of printable gun blueprints at Defcad.org.

All sixteen pieces of the Liberator prototype were printed in ABS plastic with a Dimension SST printer from 3D printing company Stratasys, with the exception of a single nail that’s used as a firing pin. The gun is designed to fire standard handgun rounds, using interchangeable barrels for different calibers of ammunition.

Technically, Defense Distributed’s gun has one other non-printed component: the group added a six ounce chunk of steel into the body to make it detectable by metal detectors in order to comply with the Undetectable Firearms Act. In March, the group also obtained a federal firearms license, making it a legal gun manufacturer.

Of course, Defcad’s users may not adhere to so many rules. Once the file is online, anyone will be able to download and print the gun in the privacy of their garage, legally or not, with no serial number, background check, or other regulatory hurdles. “You can print a lethal device,” Wilson told me last summer. “It’s kind of scary, but that’s what we’re aiming to show.”

Two thoughts immediately spring to mind. First, 25 years is a long time to spend in law school; three years is the standard for full-time student and four for night students.

Indeed, there are already attempts to regulate the technology:

All of that opposition has only made Wilson more eager to prove the possibility of a 3D printed firearm. “Everyone talks about the 3D printing revolution. Well, what did you think would happen when everyone has the means of production?” Wilson asked when we spoke earlier in the week. “I’m interested to see what the potential for this tool really is. Can it print a gun?”

The very nature of the technology would seem to make it next to impossible to regulate.