The burgeoning science of additive manufacturing is on the verge of being able to print functioning human organs. 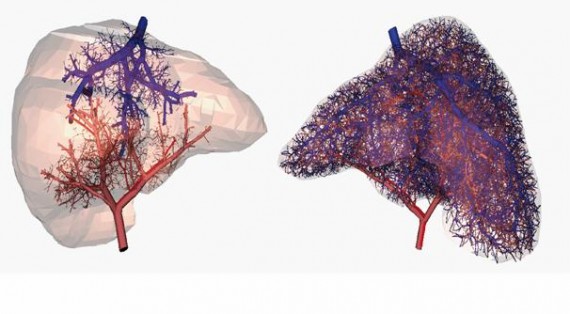 The burgeoning science of additive manufacturing is on the verge of being able to print functioning human organs.

We have already seen 3D printing create several types of human tissue, most notably liver tissue which is currently being used in drug toxicity testing. With that said, there is still one major hurdle to get us from the tiny sheets of 3D printed organ tissue, to that of entire 3D printed organs, which could one day be created by a patient’s own stem cells, and transplanted to save their life. That hurdle is the vascularisation of those organs. Every cell within a human organ, such as the liver, kidney or heart are within a hair’s width of a blood supply. This is an incredibly complex setup, one which up until now, researchers have found to be a nightmare to overcome when dealing with bioprinting. Without an adequate vascular network, the cells would be starved of oxygen, as well as a means to excrete waste, causing them to die and making the printed organs worthless.

Scientists from the Universities of Sydney, Harvard, Stanford and MIT have been working together to overcome these mountainous hurdles. Today, the University of Sydney made a groundbreaking announcement. The team of scientists from all four universities have figured out a technique, making such vascularisation possible within the 3D bioprinting process.

To achieve this, the researchers used an extremely advanced bioprinter to fabricate tiny fibers, all interconnected, which would represent the complex vascular structure of an organ. They coated the fibers with human organs-3endothelial cells, and then covered it with a protein based material, rich in cells. The cell infused material was then hardened with the application of light. Once hardened the researchers carefully removed the coated fibers, leaving behind an intricate network of tiny spaces throughout the hardened cell material. The human endothelial cells were left behind, along the tiny spaces created by the fibers, which after a week self organized into stable capillaries.

“While recreating little parts of tissues in the lab is something that we have already been able to do, the possibility of printing three-dimensional tissues with functional blood capillaries in the blink of an eye is a game changer,” said study lead author and University of Sydney researcher, Dr Luiz Bertassoni. “Of course, simplified regenerative materials have long been available, but true regeneration of complex and functional organs is what doctors really want and patients really need, and this is the objective of our work.”

The discovery of this technique should hopefully quicken the pace of bio-printing research, and lead to a time, in the not too distant future, when we can meet the demand of the growing need for organs transplants. We are still likely several years from such a time, but progress is certainly being made quite rapidly.

The implications of this technology is pretty tremendous. An estimated 18 Americans die every day from the lack of available organs for transplant, with some 120,000 currently on a waiting list.  But only 597,166 transplants have occurred in the U.S. since 1988. My guess is that number would go up tremendously if the supply of matching organs became limitless and doctors therefore didn’t have to rely on a complicated triage system to consider people for transplant.

My understanding of additive manufacturing is very limited, even though I’ve been reading about it for a number of years now. It was a major subject of the Atlantic Council’s Strategic Foresight Initiative, launched by Dr. Banning Garrett, but the focus even five years ago was on much less complex products—airplane parts and the like. If we get to the point where we’re able to easily manufacture something as complicated as a human liver, complete with a functioning vascular network, it would seem that there would be nothing we couldn’t print.

That gets us into “Star Trek” territory, potentially radically changing the global economy for the good. It also brings to mind several less happy scenarios from science fiction, with the “super-empowered individuals” Thomas Friedman started talking about years ago much more super.