Apparently, the Federal Government believes it necessary to remind you that you can buy Christmas Trees. 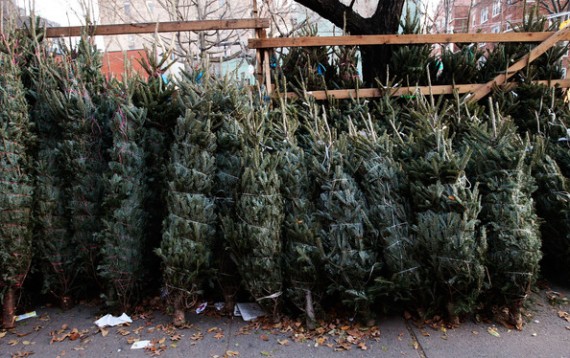 The blogosphere is abuzz today in response to a Heritage Foundation blog post about a government program that imposes a tax on Christmas tree growers for the purpose of, well, promoting Christmas trees:

President Obama’s Agriculture Department today announced that it will impose a new 15-cent charge on all fresh Christmas trees—the Christmas Tree Tax—to support a new Federal program to improve the image and marketing of Christmas trees.

To pay for the new Federal Christmas tree image improvement and marketing program, the Department of Agriculture imposed a 15-cent fee on all sales of fresh Christmas trees by sellers of more than 500 trees per year (7 CFR 1214.52).  And, of course, the Christmas tree sellers are free to pass along the 15-cent Federal fee to consumers who buy their Christmas trees.

There’s a few important things to note here. First of all, this is a tax on Christmas Tree growers, not on the trees that we all buy in parking lots and landscaping centers starting the day after Thanksgiving, although presumably at least some portion of the cost of the tax will be passed on and reflected in the price of the trees themselves. The tax itself, and the program, is apparently authorized by something called the Commodity Promotion, Research and Information Act of 1996  which set up various programs under the auspices of the Department of Agriculture to promote American agricultural products. Finally, it appears that this is something that the Christmas Tree industry lobbied for and wanted from the Department of Agriculture so, to the extent this tax is being imposed on them, it’s being imposed for something they want.

Not surprisingly, a good deal of the reaction to this on the right side of the blogosphere misses the point of why this program is such a mistake. The problem here isn’t that the Federal Government is imposing a “tax” on Christmas trees, but that it’s doing so to finance a program that it shouldn’t be implementing to begin with. The reason that the Christmas Tree growers want a program like this is because natural trees have been steadily losing market share to artificial trees in recent years. Artificial trees have been around for a long time, of course, and their benefits are pretty obvious. There’s no, or at least much less, danger of fire, they don’t cause a mess, their safer for people with allergies and homes with pets, and in the end they cost less than buying a comparably sized natural tree every year. It’s a choice consumers are making in increasing numbers apparently, and the natural tree industry obviously doesn’t like it.So, they decided to get the government involved in “promoting” natural Christmas trees.

Does anyone really need to be reminded that natural Christmas trees are available? Starting at least by the day after Thanksgiving, and in some places earlier than that, lots selling Christmas trees pop up all over the country. They’re pretty easy to find for the most part and, if you need reminding then driving around and seeing random people with trees tied to the roof of their car is pretty good advertisement. Then, there are all the trees you see in public places and shopping malls, the National Tree in Washington, D.C., and the tree at Rockefeller Center in New York City. Put simply, you’d pretty much have to be blind not to be aware of the existence and availability of natural Christmas trees in the United States.

Why, then, do we need a government program to promote their sale?

We don’t, of course, and in reality the government shouldn’t be involved in product promotion of any kind. That’s not their job, it’s the job of the industry itself. If tree growers want to create a promotional campaign, then they can do so through their trade association. This simply isn’t something that the government should be doing, especially for a product that is sold primarily in a domestic market. Instead of doing that, though, they lobbied the government to create a program to do it for them.

What we’ve got here, then, is another example of crony capitalism, with the government putting its finger on the scale to benefit the natural tree industry at the presumed expense of the artificial tree industry and, most likely, the taxpayers (that 15 cent a tree fee is unlikely to be enough to fund the program completely). That’s crony capitalism, folks. It’s a small example, but it’s just as wrong as subsidies for ethanol and specialized tax breaks for the oil industry. They’re all wrong, they all need to go.

Update: ABC News White House Correspondent Jake Tapper is reporting that implementation of the program is being delayed:

The U.S. Department of Agriculture is going to delay implementation and revisit a proposed new 15 cent fee on fresh-cut Christmas trees,  sources tell ABC News. The fee, requested by the National Christmas Tree Association in 2009, was first announced in the Federal Registry yesterday and has generated criticism of President Obama from conservative media outlets. The well-trafficked Drudge Report is leading with the story, linking to a blog by David Addington, a former top aide to then-Vice President David Addington, at the conservative Heritage Foundation assailing the president thus: “The economy is barely growing and nine percent of the American people have no jobs. Is a new tax on Christmas trees the best President Obama can do? And, by the way, the American Christmas tree has a great image that doesn’t need any help from the government.”

Nonetheless, the criticisms have apparently had an impact as the program is now being delayed.

Well, that was a pretty quick back down.