A Night Of Comity Turns Bitter

What was supposed to be a night away from the campaign trail quickly turned partisan. 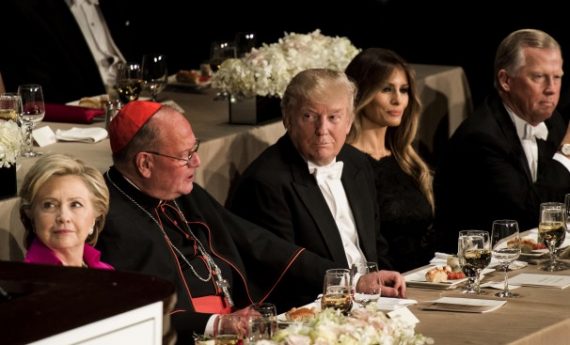 In most Presidential Election years, the Al Smith Dinner is one of the easiest events of the year for both candidates. Named after the late New York Governor who became the first Catholic nominee of a major political party only to lose in a landslide to Herbert Hoover in 1928, the dinner is a major annual fundraiser for Catholic Church charities in the New York area and, in Presidential election years, has played host to the major party candidates in what is supposed to be a night off the campaign trail the highlight of which are usually remarks filled with largely self-deprecating humor from the two candidates. Since the parties are considered to be guests of the Archbishop of New York, the one rule that candidates in the past have followed is to leave the partisanship aside for one night. Perhaps inevitably, the nature of this year’s campaign made that either impossible or unlikely. In any case, rather than a night in which the respective candidates light-heartily poked fun at one another, but mostly themselves, the affair turned into a metaphor for this entire campaign:

Donald J. Trump began this quadrennial exercise in campaign humility and self-deprecation on Thursday by comparing himself to the son of God — just another “carpenter working for his father” in his youth.

By the end, facing cascading and uncomfortable jeers from a crowd full of white ties and gowns, he had called Hillary ClintonCatholic-hating, “so corrupt” and potentially jail-bound in a prospective Trump administration.

“I don’t know who they’re angry at, Hillary, you or I,” Mr. Trump said sheepishly from the dais, turning to his opponent amid the heckling.

It seemed clear to everyone else. Mr. Trump was being booed at a charity dinner.

So it went at the Alfred E. Smith Memorial Foundation Dinner in Manhattan, a presidential campaign ritual of levity and feigned warmth — upended, like so much else in this election season, by the gale-force bid of Mr. Trump.

Breaking with decades of tradition at the gathering once he took the microphone, Mr. Trump set off on a blistering, grievance-filled performance that translated poorly to the staid setting, stunning many of the well-heeled guests who had filed into the Waldorf Astoria hotel for an uncommon spectacle: an attempted détente in a campaign so caustic that the candidates, less than 24 hours earlier, declined to shake hands on a debate stage.

Relations did not much improve.

Mr. Trump’s set began typically enough. He joked about the size of his hands and Mrs. Clinton’s comparatively small crowds. He even very nearly poked fun at himself — insofar as a zinger about his wife, and her partly plagiarized Republican convention speech, qualifies — when discussing the “biased” news media.

“You want the proof? Michelle Obama gives a speech, and everyone loves it,” Mr. Trump said. “My wife, Melania, gives the exact same speech and people get on her case.”

Some sharper jokes about Mrs. Clinton seemed to edge just to the line.

“Just before taking the dais, Hillary accidentally bumped into me. And she very civilly said, ‘Pardon me,'” Mr. Trump said, as murmurs filled the room. “I very politely replied, ‘Let me talk to you about that after I get into office.'”

Mrs. Clinton, seeming to get the joke before some others, chuckled hard before the punch line.

But quickly, his remarks took a more menacing turn.

Mr. Trump said Mrs. Clinton was merely “pretending not to hate Catholics,” an allusion to hacked correspondences from Clinton aides that appeared to include messages criticizing Roman Catholic conservatism.

He wondered aloud how someone like Mrs. Clinton — “so corrupt,” he said — could sell herself to the American people. “What’s her pitch?” he asked. “The economy is busted, the government’s corrupt, Washington is failing. Vote for me.”

The evening went somewhat better for Hilary Clinton, but not by much:

“I took a break from my rigorous nap schedule to be here,” she said, adding, “Usually, I charge a lot for speeches like this.”

But she soon turned to more cutting satire, joking that Mr. Trump was “translating from the original Russian” on his teleprompters and wondering just how President Obama might be able to visit the White House for a reunion of former presidents under a Trump administration.

“How is Barack going to get past the Muslim ban?” she asked.

Noting that she was speaking second, she riffed: “It’s amazing I’m up here after Donald. I didn’t think he’d be O.K. with a peaceful transition of power.”

She also spoke of the Statue of Liberty, recounting how for most Americans, the green lady of freedom represents a shining beacon of hope and a welcome symbol for immigrants arriving on the nation’s shores. But Mr. Trump, she added with a glint of steel, “looks at the Statue of Liberty and sees a 4” — a not-so-veiled reference to his comments rating the physical appearance of women.

“Maybe a 5 if she loses the torch and tablet and changes her hair,” she continued, before making an explicit, if subtle, pitch for becoming the nation’s first female president.

“You know, come to think, know what would be a good number for a woman? 45,” she concluded triumphantly.

The night was a marked contrast to four years ago when Mitt Romney and Barack Obama shared the dais at the same time and came away with good reviews for displays of humor and good will during a tough campaign. Instead of that, this year we got Trump, who spent most of his time attacking others rather than making fun of himself, and Clinton, who had better material but honestly just isn’t very good at delivering it. At the very least it makes one dread the prospect of future White House Correspondents Dinners regardless of which one of these two ends up winning in November. Of the two, though, it was clearly Trump’s remarks that were the least well-received in the room. To the extent any of what he said was self-deprecating, it was mainly one joke and that one was aimed mostly at his wife and the media rather than himself. The rest was almost identical to some of his campaign speeches even though Trump and his people must surely have been aware of the tradition involved in the event. By the time he sat down, it was clear even from just listening to the reaction that Trump had lost the crowd.

In the end, of course, what was said at a dinner attended mostly by the upper-crust of New York City elites is hardly going to matter to the result of this election. Most Americans either will not have seen coverage of the event, or simply won’t care about it enough for it to make a difference in their vote. On some level, though, the entire affair seemed to be a metaphor for this entire Presidential campaign and what it has done to American politics. While election campaigns have been intense in the past, this year’s contest seems especially bitter on all sides and it seems unlikely that the wounds are going to heal very easily after the voting is done and the winner is decided. Of course, when you have candidates like these, that’s probably inevitable.

In any case, here are Trump’s remarks from last night:

And here are Clinton’s:

By contrast, you can watch what Mitt Romney and President Obama had to say four years ago, and you’ll see what I mean about the marked difference in tone.