Jack Balkin, the Knight Professor of Constitutional Law and the First Amendment at Yale Law School, examines the Constitutionality of the Houseand Senate versions of the bills taxing bonuses of AIG and other companies that received government bailouts and pronounces them Constitutional.  He quickly dismisses arguments under the Due Process, Takings, Ex Post Facto, and Contracts Clauses before getting to the heart of the matter:

Finally, there is no problem under the Bill of Attainder Clause because the tax does not single out specific individuals for punishment; in addition it is both prospective and retrospective in application. First, the tax defines the class to which it applies to an abstractly defined group rather than naming particular individuals. It applies to persons working for enterprises that have received emergency government subsidy; it is not aimed at particular companies or specific employees. Second, the tax is for a regulatory purpose, as described above, and not for a punitive purpose. Preventing misuse of government funds, limiting bad incentives, and avoiding moral hazard are regulatory purposes, not punitive purposes. The fact that isolated members of Congress may have expressed an impermissible punitive or retributive purpose does not mean that the tax violates the Constitution if the text of the bill on its face has an overtly regulatory purpose. Third, the tax is both prospective and retrospective in its targets, which is consistent with a regulatory as opposed to a punitive purpose.

It is worth noting that the fact that the proposed taxes are constitutional does not mean that they are necessarily good public policy.

It’s worth noting, too, that just because something would likely pass Supreme Court muster doesn’t mean it’s within the spirit of the Constitution as written by the Framers.  The courts have construed some of our rights exceedingly narrowly while crafting others out of shadows.  But, alas, their say is what matters in practical terms.

Interestingly, the issue may be moot as President Obama has expressed strong reservations about the bill and New York AG Andrew Cuomo has now announced that most of the really huge bonuses — including 9 of the top 10 at AIG and 15 of the largest 20 in AIG’s financial products division — have been returned under pressure.  Indeed, employees accounting for $50 million of the $80 million in bonuses paid to American citizens have returned or agreed to return the money.   Another $85 million was paid to people outside the jurisdiction of the United States and New York governments.

Frankly, I’m astounded that someone would return a bonus of $6.4 million rather than take a permanent vacation to Aruba or somewhere else outside the taxing jurisdiction of Congress. 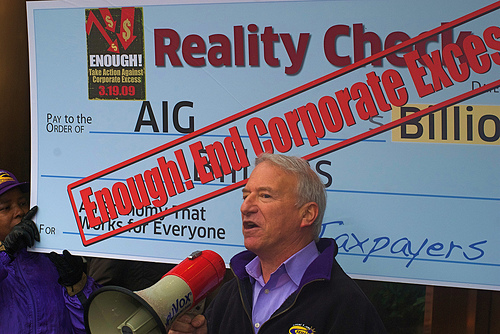