Air Force Cracks Down On Objectification

The Air Force has a leadership crisis. 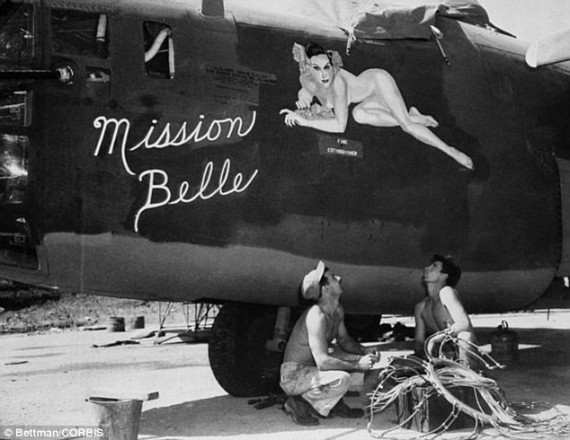 The Air Force is cracking down on public displays objectifying women a mere thirty years after other employers.

Commanders and supervisors in all corners of the Air Force will conduct a widespread sweep of all work spaces and public areas starting today [Wednesday, December 5], looking for pictures, calendars and other materials that objectify women.

The order covers all active, reserve and Air National Guard units and must be completed by Dec. 17.

Pictures of scantily clad women in calendars, posters or in briefing slides have no place in a professional workplace, said Chief of Staff Gen. Mark Welsh, who ordered the service-wide health and welfare inspection.

Welsh has emphasized the need to stop sexual assaults and harassment in the workplace since coming to office in August, and he told Air Force Times he had received multiple complaints about images, jokes and comments that made women and some men uncomfortable. The complaints indicated that many women felt they had to “go along to get along” with offensive images and comments if they wanted to steer clear of trouble.

“In my view, all this stuff is connected. If we’re going to get serious about things like sexual assault, we have to get serious about an environment that could lead to sexual harassment. In some ways this stuff can all be linked,” Welsh said Dec. 4. “I’m not saying every case is linked, but it could be linked, and why would we want to tolerate there even being a chance of that?”

“After talking to a number of our female officers and NCOs, I believe that there is a potential that this is a problem in more than those isolated areas,” Welsh said. “Quite frankly, if we have 20 percent of our people who don’t feel that they are fully respected and valued for all the incredible talents and the dedication they bring to the job, then that’s just not the Air Force we want to be.”

I remember when this sort of thing was controversial in firehouses and other male-dominated workplaces that were beginning to integrate women. It was deemed “politically correct” and the argument was that calendars of scantily clad (or even unclad) women was just a matter of “boys being boys” and that the women whining about it should just lighten up; after all, it was their decision to enter a male-dominated field.

Ronald Reagan was in his first term then. A quarter century plus later, it’s shocking that it’s even still an issue. A generation has passed.  Aside from a few grizzled old chief master sergeants and senior officers, nobody in the current Air Force was alive, much less in the workplace, in that old era. How the hell do they not know better than this?

Yet, clearly, the problem is so rampant that the Chief of Staff is having to spend his time addressing this more than a decade into a shooting war. This is, sadly, yet another manifestation of a leadership crisis in the Air Force, specifically dealing with women’s issues, that’s been apparent for twenty years.