If you're still not convinced that we lost the war in Iraq, this should settle the argument. 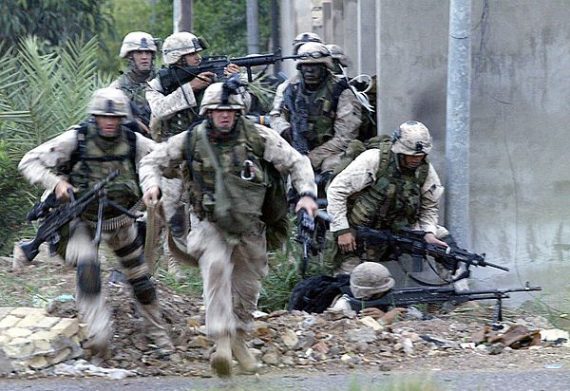 The people who attacked us on 9/11 now own the key battleground in a war we launched ostensibly in response.

Black-clad Sunni militants of Al Qaeda destroyed the Falluja Police Headquarters and mayor’s office, planted their flag atop other government buildings and decreed the western Iraqi city to be their new independent state on Friday in an escalating threat to Prime Minister Nuri Kamal al-Maliki, whose forces were struggling to retake control late into the night.

The advances by the militants — members of the Islamic State of Iraq and Syria, or ISIS — came after days of fighting in Falluja, Ramadi and other areas of Anbar Province. The region is a center of Sunni extremism that has grown more intense in reaction to Mr. Maliki’s Shiite-dominated government in Baghdad and the neighboring civil war in Syria.

Assertions by Islamic State of Iraq and Syria fighters that they were in complete control of Falluja were disputed by government security forces and an alliance of tribal leaders who have joined them. By nightfall, the security forces and tribal militia members had recaptured a part of the main street and a municipal building.

Mohamed al-Isawi, the head of the Falluja police, said in a telephone interview that he was gathering men in an area north of Falluja, as a staging ground for what he hoped would be a decisive battle to retake full control of the city.

“We succeeded today with the tribesmen in getting back the main street of Falluja after a big fight,” Mr. Isawi said, “and now we are keen to fight the terrorists and liberate our city from any traces of the criminals.”

But Islamic State of Iraq and Syria fighters still appeared to have the upper hand, witnesses and others reached by telephone said, and there was no question that the group had scored a propaganda victory against Mr. Maliki, whose authority over Anbar Province has been severely undermined in the two years since American forces left the country.

The group’s fighters cut power lines in Falluja late in the day and ordered residents not to use their backup generators. In one area of Falluja, a militant said over a mosque loudspeaker: “We are God’s rule on Earth! No one can defeat God’s will!”

The group advanced hours after a short period of calm had returned to the city, where the traffic police and street cleaners resumed work during the day and mosque loudspeakers exhorted stores to reopen so hungry residents could buy food.

The calm evaporated when the militants appeared at the close of Friday Prayer — which had been moved by local imams to a public park, away from the combat zones — and seized the stage, waving the Qaeda flag and daring the authorities to evict them.

“We declare Falluja as an Islamic state, and we call on you to be on our side!” one fighter shouted to the crowd, according to witness accounts.

Referring to Mr. Maliki’s government and its Shiite ally Iran, the fighter shouted, “We are here to defend you from the army of Maliki and the Iranian Safavids!” The Safavid dynasty ruled present-day Iran and Iraq hundreds of years ago.

The resumed fighting included other areas of Anbar Province, including its largest city, Ramadi.

It has pitted Qaeda-affiliated Sunni extremists, who now control large amounts of territory in the desert province, against the forces of the Shiite-dominated central government, backed by local tribesmen who are not strong supporters of the government but, in this struggle, have decided to side with the army and the police against Al Qaeda.

The fight has become a severe test of Mr. Maliki’s ability to hold the country together.

The combat scenes in Anbar, which was the heart of the Sunni insurgency during the American occupation and was where more than 1,300 American soldiers were killed, have provided the sharpest evidence yet of a country descending into a maelstrom of violence.

For the Qaeda militants in Iraq, who are fighting under the same name as the most extremist Sunni rebels in Syria, the gains they have made in Anbar appear to be a significant step toward realizing the long-held goal of transforming Iraq and Syria into one battlefield for the same cause: establishing a Sunni Islamist state.

Let’s stipulate at the outset that these gains may not be permanent and that the al Qaeda of 2013 is a very different animal than the one of 2001. Still, it’s depressing news given the investment of American blood and treasure to turn Iraq into a viable state that would serve as a bulwark against extremism in the region.

It’s worth pointing out, too, that there was no significant al Qaeda presence in Iraq prior to the 2003 American invasion. Advocates of the so-called “flypaper theory” nonetheless thought it was a good thing when militants under Qaeda’s banner flooded into Iraq to fight American forces. After all, the refrain went, it was better to fight them there than to fight them here. And, certainly, we killed them by the bushel, including such many “senior leaders” and “number three officials” that it became a running joke. Yet, American forces are long gone and they’re still there, running the city that was arguably the most epic battleground of the war.

Aside from regime change itself, it’s not clear that we accomplished a single one of our objectives in that conflict. There was no nuclear program. The chemical weapons cache consisted of a few leftovers from the world wars. The Maliki government is corrupt and incompetent to provide basic security for the citizenry. And now al Qaeda is running major outposts.