The Alaska Supreme Court has approved the state providing a list of certified write-in candidates to voters who ask for help. 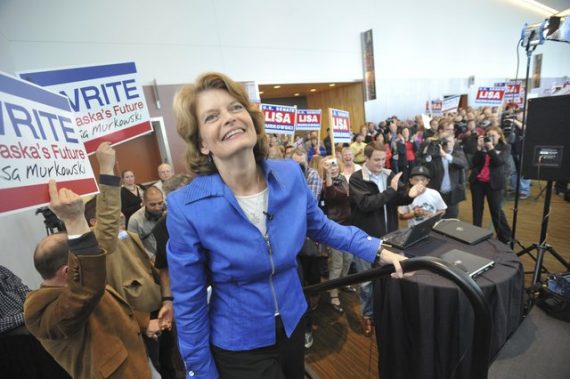 Doug already pointed this out in the comments section of the “Trouble For Joe Miller In Alaska?” thread but it’s worth a quick posting of its own: “Alaska Supreme Court reverses ban on write-in candidate lists.”

Hours after a judge blocked the Alaska Division of Elections’ effort to give voters lists of write-in candidates, the state Supreme Court stayed his ruling, providing a boost for the campaign of incumbent U.S. Sen. Lisa Murkowski.

The lists can be shown to voters who request them, the high court ruled, but candidates’ party affiliation must be removed.

The court also directed the Division of Elections to attempt to segregate absentee ballots cast by voters who have seen the lists — an apparent preparation for legal fights over whether those ballots can be counted. The court ordered briefs by Thursday on whether its stay should be permanent.

Earlier in the day, Superior Court Judge Frank A. Pfiffner rejected the state’s argument that providing a list of certified write-in candidates to voters who ask for help complies with the state’s obligation to aid citizens who need assistance casting ballots.

The judge found that distributing the lists violated a state elections regulation prohibiting dissemination of information about candidates within 200 feet of all polling places.

IANAL but this strikes me as a truly bizarre notion.  By there very nature, write-in candidates are not on the ballot and should have zero aid from the state.  The idea that the taxpayer would provide “a list of certified write-in candidates” makes no sense.

The Secretary of State’s earlier statements that he would accept misspellings of “Lisa Murkowski” so long as the voter intent was clear strikes me, on the other hand, as perfectly legitimate.

FILED UNDER: Campaign 2010, Law and the Courts, Quick Takes