The most walkable cities in America are also the most successful.

Richard Florida scans some data on “walkable neighborhoods” and finds that they support his preexisting conclusions.

Either way you slice it, San Francisco tops the list, followed by the East Coast communities of the Bos-Wash corridor: NYC, Boston, Philly, and D.C. Seattle and Portland do well, as does Chicago. Somewhat surprisingly, L.A. scores reasonably highly on both metrics.

As before, we found significant associations. Walkable metros had higher levels of highly educated people (.44) and of the creative class (.46). Perhaps more significantly, they also had higher incomes (.64) and higher housing values (.55), more high-tech companies (.58), and greater levels of innovation (.4).

Walkability is more than an attractive amenity–it’s a magnet for attracting and retaining the highly innovative businesses and highly skilled people that drive economic growth, raising housing values and generating higher incomes.

While I have no doubt that “walkability” is indeed quite desirable, the idea that this is somehow the driving factor on making America’s largest cities home to high-earning, highly educated people who live in expensive homes is laughable.   It’s pretty obvious, in fact, that walkability and population density go hand-in-hand.

Why Great Cities Are Walkable

New York, Boston, Philly, DC, and Chicago were thriving cities well before the invention of the automobile and have remained so from time immemorial.  They’ve remained walkable because there’s incredible competition for space, which drives land prices through the roof, and encourages high density living-working-playing areas.

I’m a little bemused at the notion of LA, the nation’s most famous car city, as being “walkable.”  But LA is really a series of smallish towns connected by jam-packed highways.  Walkability is doubtless part of the appeal of living there but, again, it’s largely a function of high population density and competition for space.

I don’t know Seattle and Portland, the relative new kids on the block, all that well.  They’re definitely cities that became what they are today well into the automobile area and have a bohemian, planned community sort of vibe.  So they may be legitimate cases of Florida’s “walkability attracts” thesis.

But, for the most part, the variables here are interrelated.   A handful of metropolitan areas have a concentration of Creative Class jobs — doctors, lawyers, bankers, financiers, professors, writers, and the like.  So, that’s where most people who seek to make their living that way migrate.  Those jobs tend to require a high degree of education and to pay well.   And, because a whole lot of well paid people want to live as close to their jobs as possible rather than be stuck in traffic several hours a day, they bid up the prices for housing in the central city.

This sets off a spiral that makes “walkability” a must.  It’s ridiculously expensive to park a car in these cities, since parking lots and parking garages have to compete with office space and apartment buildings.  Oh, and driving is generally slower than walking if your destination is within a mile or two.   The combination of the impediments to driving and high population density makes mass transit feasible — further eliminating the need to accommodate driving in city planning.

Why The Heartland Isn’t Walkable

If everyone loves walking so much, why is so much of America unwalkable?

Well, a lot of the country developed an agri-business economy rather than an industrial one.  Growing crops or raising livestock requires huge tracts of land with relatively few people.  Technology made it less labor intensive and efficient, allowing a tiny number of people to do the work that once occupied most of the population. Over time, it became more efficient to have fewer farms and ranches to achieve economies of scale.

If you employ 200 people to manage 2000 acres of land, there’s probably not going to be a Starbucks nearby.

Oh, and if you’re competing with farm animals and soybean plants for land use, you’re likely to build a one-story house with a three-car garage and a large backyard rather than living in an 800 square feet apartment on the 48th floor of a high rise.   Ditto your neighbors — if you have any.   And you’ll probably want to hop in your truck to get groceries rather than walking the 23 miles to the Piggly Wiggly.

Of course, lots of Americans live in between these extremes, living neither a rural existence nor downtown in a teeming metropolis.   There are smaller cities and suburban areas that have limited walkable areas but generally not all that much mixed use land.

Here, public policy decisions have tended to work against walkability.   Land is cheap in most of these places, so people naturally build bigger houses.  The natural desires for privacy and a desire to live amongst your own kind tends toward communities of single family homes of similar size and cost rather than being stacked atop one another in deluxe apartments in the sky.

For obvious reasons, since these cities were mostly built in an era where people had their own cars, they tended to segregate housing subdivisions from industrial areas, initially through choice and latter through zoning laws.    Shopping areas tended to get built just far enough from these housing areas so that most people had to drive to get there. Large parking lots, where people naturally don’t have to pay to do business, further enables driving but also adds to the sprawl with makes it necessary.

While walkability is mostly a byproduct of population density and economic base — not, as Florida would have us believe, a key driver of these things — there’s little doubt that we’d be better off with more of it.   Long commutes and traffic jams are draining, stressful, and robbing us of time with our family.  Driving everywhere is contributing to our national obesity epidemic.   And segregating our work, home, shopping, and other activities into widely spread clusters is disconnecting.

There has been a move over the last fifteen or twenty years to move these places in the other direction, whether to revitalize downtown areas or to encourage mixed use development. In some of the newer exurban areas of DC, for example, housing clusters are intentionally interspersed with beautifully bermed strip malls containing shops, restaurants, doctors and dentists offices, and the like.   They don’t quite break the driving habit but they at least allow for fewer trips.

But the big city life isn’t for everyone.  I enjoy working in DC more than I thought I would but, as much as a hate the traffic — both sitting in it and having to account for it constantly in everyday decisionmaking — I have no desire to move to a tiny townhouse with no backyard.  Not having grown up in a big city, I value space, privacy, and quiet too much for that.

And, amusingly, while DC is supposedly one of the very most “walkable” cities in the country, I actually find walking it very aggravating.  Having to stand around and wait for a light to change at virtually every intersection is pretty much like being stuck in traffic. 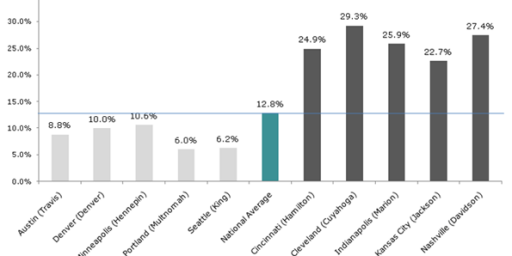 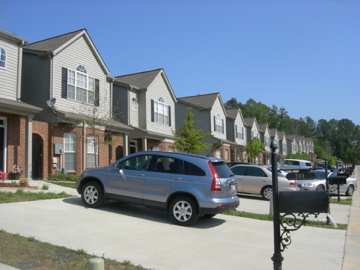