An Attempt at Unpacking the News Corp Scandal

I must confess to having only paid peripheral attention at first, but it is clear that there is a major story here that requires attention.

What in the world is going on with News Corp and the phone hacking allegations?  I must confess to having only paid peripheral attention at first, but it is clear that there is a major story here that requires attention.

Consider just the events of the last week or so:

So, we have here a scandal that touches mass media, major political actors, and law enforcement.  And, it would seem that we are just at the tip of the proverbial iceberg. The matter is now under investigation by the House of Commons.

What exactly is this scandal about?  At its based, it is about at the hacking of the phones of at least 4,000 persons (celebrities, politicians, and so forth) in search of scoops.   And, not just celebs, but:

Murdered teenager Milly Dowler and the parents of murdered Soham schoolgirls Holly Wells and Jessica Chapman were allegedly targeted. Relatives of dead UK soldiers and relatives of 7/7 victims may also have had their phones hacked.

And then, the police connection:

There also allegations that a police officer offered to sell NoW a contacts book containing details of the royals and their staff.

Source for above:  the BBC.

There are also allegations of hacking aimed at former Prime Minister Gordon Brown, and not just phone hacking, but attempts to access financial and medical records.

All of this, as the bullet points above touch on, has been made even more complicated by the hiring of News of the World executives at high levels of British government and law enforcement.  Further, the scandal has been brewing for years and there have been allegations of insufficient police attention to the matter.

This is developing, and in a big way.

The BBC has much, much more including:

Also, the London Telegraph‘s page dedicated to the story is here.

And, of course, given the reach of News Corp, the question becomes whether the issue will become relevant in the US as well.  New York Magazine addresses that issues here:  Murdoch Scandal Heats Up in the United States. 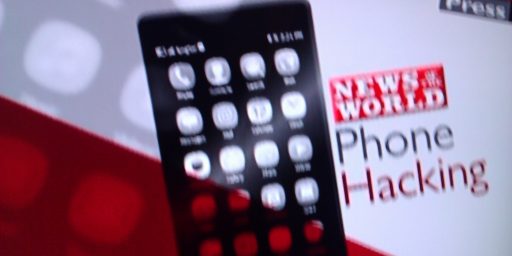 Former Editor Of News Of The World Arrested In Hacking Case

When to Assess a War’s Progress?