Angus King Hints He May Caucus With GOP In 2015 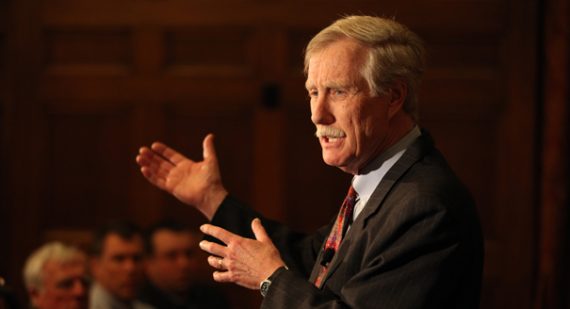 Sen. Angus King (I-Maine), who caucuses with the Democrats, will decide after the midterm elections whether to switch sides and join the Republicans.

He is leaving open the possibility of aligning himself with the GOP if control of the upper chamber changes hands.

“I’ll make my decision at the time based on what I think is best for Maine,” King told The Hill Wednesday after voting with Republicans to block the Paycheck Fairness Act, a measure at the center for the 2014 Democratic campaign agenda.

King’s remarks are a clear indication that congressional leaders on both sides of the aisle will have to woo the 70-year-old senator in order to recruit him to their side.

That lobbying battle could be especially intense if King’s decision determines which party will control the chamber in the next Congress.

If Republicans pick up six seats this fall, they will be running the Senate in 2015. But a pickup of five would produce a 50-50 split and Democratic control, with Vice President Biden breaking the tie. King could tip the balance.

The former governor of Maine is an independent, but he has generally been a reliable Democratic vote for Senate Majority Leader Harry Reid (D-Nev.).

King said after the 2012 elections that being in the majority was important to him, when he announced his decision to caucus with Senate Democrats, giving them control of 55 seats.

“The outcome of last week’s election in some ways makes this decision relatively easy. In the situation where one party has a clear majority and effectiveness is an important criteria, affiliating with the majority makes the most sense,” King said at the time.

Senate Minority Leader Mitch McConnell (R-Ky.) could try to sweeten the prospect of switching caucuses by offering him a slot on the Finance Committee or another plum assignment. The GOP would gain committee seats if it wins the majority, making it easier to hatch a deal.

Regardless, King will have leverage in the lame-duck session.

Another Senator who might find himself the subject of lobbying after the midterms is West Virginia Democrat Joe Manchin. While Manchin is a Democrat he has often bucked his party on key votes and it wouldn’t be too surprising to see him join King as an Independent and caucus with the GOP if the political winds are blowing in that direction. With the GOP likely to at least come very, very close to Senate control after Election Day 2014, I’d expect we’ll be seeing both of these men getting a lot of national attention at the end of the year.