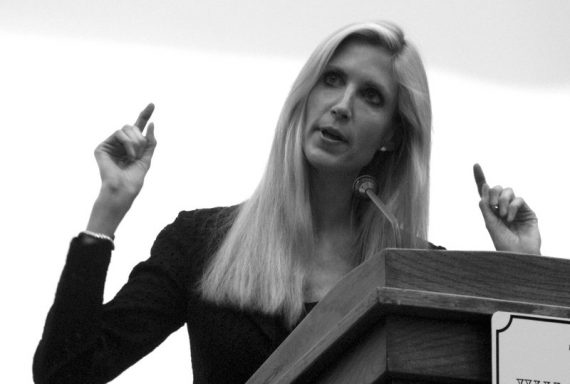 Paul Waldman wonders “What Ever Happened to Ann Coulter?”

Remember Ann Coulter? Seems like just yesterday she was Queen of the Right, the whole political world hanging on her every bile-laced tirade. Yet she’s all but disappeared.

Not that she isn’t trying. She’s still got her weekly column over at Human Events (latest entry: “Alvin Greene: The Most Qualified Democrat I Have Ever Seen” – Har har!). She still makes regular appearances on Fox, showing up to gab with Bill O’Reilly or Sean Hannity. But she seems to have completely lost her ability to move from the right-wing outlets into the mainstream discussion.

So what happened? First, her shtick just got old. “Ann Coulter said something offensive!” could only be big news so many times. After a while, it seemed like she was just trying to be outrageous for the sake of outrageousness. I’ll attack 9/11 widows! I’ll call Al Gore “a total fag”! Aren’t I outrageous! Look at me!!! After a while it ceased to be interesting.

But something else happened. These are boom times for the right. Certain political sectors thrive when their side is out of power, and commentary is one of them. Being on the outside, and being angry at those on the inside, can be invigorating. That’s why subscriptions to liberal magazines tend to go up when there’s a Republican in the White House, and subscriptions to conservative magazines go up when there’s a Democrat in the White House. But even though Barack Obama should have been great for Coulter, Inc., the right wing has passed her by. Her act seems somehow out of place. It’s not that there isn’t plenty of hate on the right, but Coulter’s hate was just pure venom, without much point to it. She had none of the crazy conspiracy theories that have become de rigueur. She shot out in all directions, while the people at the top of the heap now, like Glenn Beck, are convinced they are driven by a complex and coherent ideology, complete with a Founding Father fetishism that would sound insincere coming from Coulter.

With few exceptions, I’ve pretty much ignored broadcast media talking heads the last few years, paying attention only when something crosses into the blogospheric debate.   But my guess is that she’s spawned a cottage industry of imitators who are crazier, hotter, or both.   The number of beautiful 20-something conservative commentators vying for air time on FOX is high.  And most of them have mastered new media, whether it be Twitter or blogs.